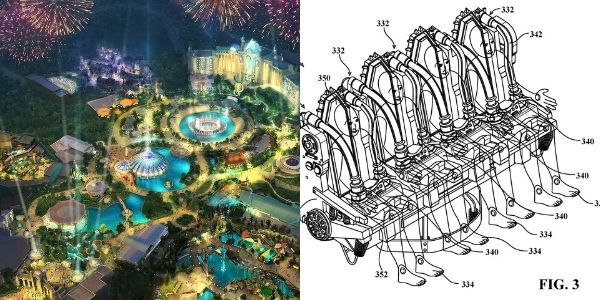 Could we be getting a Frankenstein-themed attraction in Orlando’s newest Universal Park?

The Universal Studios Theme Parks across the globe provide some of the most fun and high-quality entertainment within the industry. Whether it is in The Wizarding World of Harry Potter or the newly-opened Super Nintendo World at Universal Studios Japan, Guests are able to fully immerse themselves in some high-tech and ultra-themed worlds.

The newest addition to the Universal Studios Park lineup is the much anticipated Epic Universe, a brand-new addition to Universal’s Orlando Resort. According to the speculative concept art below from Orlando Park Stop, this addition will supposedly add at least two roller coasters, several indoor rides, large lakes, and a towering hotel. All of the details have been pure speculation until patents of a new ride were revealed. Through concept art and rumors, we can speculate that the large show building shown below would hold a KUKA arm-style ride, similar to the amazing Harry Potter and the Forbidden Journey.

We have known nothing about these rumors until now, however, as Universal has acquired patents for a ride that perfectly fits this description of a KUKA swing-arm attraction in this large show building. Perhaps the most exciting thing to anticipate about this attraction is it’s potential theming.

When looking at the patents, the ride restraints seem to be heavily themed and give off a science-looking, steam-punk type vibe. This is very similar to what we have seen in recent visual representations of classic Universal films such as Frankenstein and Dracula. The chairs and headrests feature rigid spikes, as well as very mechanical-looking seats and arm restraints.

This theme would work perfectly as Nicolas Cage was just announced to be working with Universal on a new Dracula movie. Again, this is not confirmed at this time, however the clues could potentially prove it to be true. There have been rumors of a Universal Monsters section in the Park as well, plus, with Halloween Horror Nights being such a success, this idea could prove to be highly popular and lucrative as an all-year round spook.

One thing is for sure though when looking at these patents, this ride will be a thrilling and super exciting experience for Guests when visiting Universal’s Epic Universe which has a loose projected opening date of 2025, however that can be extended as we have seen in the past.

We do know that DreamWorks IP will be heavily featured in Epic Universe. There have been rumors of a How to Train Your Dragon section in the park, which could fill the DreamWorks hole, but that rumor is projected to be a coaster similar to Dueling Dragons which was removed from Islands of Adventure.

Have you been to any of the Universal Parks and Resorts? Are you excited about Universal’s Epic Universe?