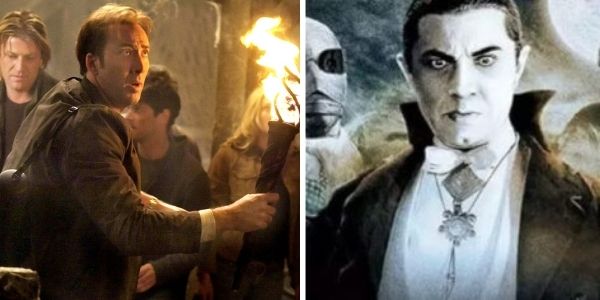 Nicolas Cage has been an actor that many have either loved or, for some, loved to hate. Cage became very well known for his role as Benjamin Franklin Gates in National Treasure (2004). Now Cage is returning, but he is stepping away from Disney and joining Universal.

Universal makes a ton of fantastic films, and when it comes to the horror realm, they do not fall short. The Universal Monsters collection is a strong one that many horror and Halloween fans deem as classic staples to the genre. As noted by Universal Monsters Fandom:

Universal Monsters or Universal Horror is the name given to a series of distinctive horror, suspense and science fiction films made by Universal Studios from 1923 to 1960. The series began with the 1923 version of The Hunchback of Notre Dame, and continued with such movies as The Phantom of the Opera, the Dracula franchise, the Frankenstein saga, The Mummy franchise, The Invisible Man films, Bride of Frankenstein, Son of Frankenstein, The Wolf Man series, Frankenstein Meets the Wolf Man, and Creature from the Black Lagoon. The studio’s leading horror actors were Lon Chaney, Béla Lugosi, Boris Karloff, and Lon Chaney, Jr., and the numerous directors included Tod Browning, James Whale, Robert Florey and Karl Freund.

Since then, we have actually seen heavy representation of the characters in the Universal theme parks within Halloween Horror Nights. Now, there have even been rumors that Universal’s next theme park, Epic Universe, will have a Universal Monsters section. Of course, that is unconfirmed, but now, we can see that Universal is stepping back into their Monsters collection to create an updated Dracula film with Nicolas Cage.

The Hollywood Reporter confirmed the news:

Now, in a deal sealed with a vampire’s kiss, Cage is returning to a big-studio movie and will play the meaty role of Dracula in Universal Pictures’ monster movie Renfield.

The character of Renfield originated in Bram Stoker’s 1897 novel Dracula as a patient in an asylum with an obsession for drinking blood, deluded into thinking he will find immortality. He bows at the feet of Dracula, who, in the very definition of toxic work environments and co-dependent relationships, feeds him insects and rats and dangles everlasting life in front of him.

It is unclear how Renfield takes on the dynamic as plot details are being kept in the coffin, but the project is described as a modern-day adventure story that is comedic in tone.

It will be interesting to see how Cage interprets the character and if we see his rendition of Dracula in the Parks in the future, especially with Halloween Horror Nights only increasing in popularity!

What do you think of this new casting news? Let us know in the comments below!