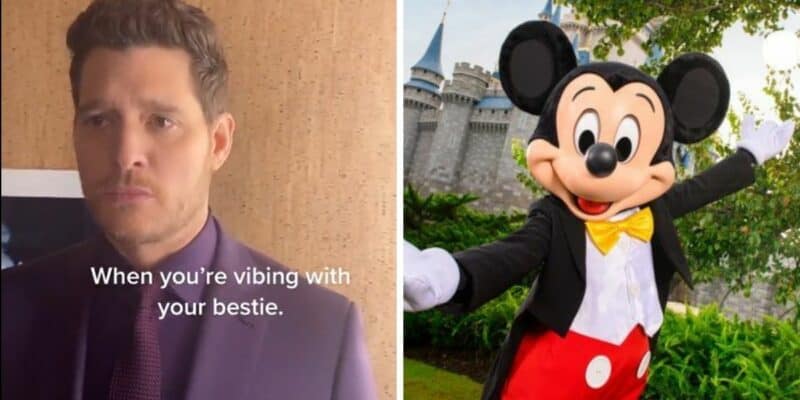 Now, if you sang that in your head in Michael Bublé’s voice, you’re not alone. The pop sensation has seriously made Christmas music his specialty, with his 2011 “Christmas” album and a new NBC Christmas television special airing this month.

And to make Bublé even cooler, he now considers a popular Disney character his “bestie” and released a video dancing with this new friend.

Bublé is, of course, a huge Disney fan, having performed in the Disney Holiday Singalong last year on ABC alongside Derek Hough, BTS, Adam Lambert, and Katy Perry.

Back in June, Christmas singer Michael Bublé shared his excitement at visiting Star Wars: Galaxy’s Edge at Disneyland Resort in California, taking to his Facebook to share a family photo in front of Storm Troopers.

Although not Bublé’s first Disney theme park vacation, he claimed the Rise of the Resistance attraction was “the greatest experience ever!”, which many Star Wars fans would appear to agree with.

Ahead of his new Christmas special Michael Bublé’s Christmas in the City airing tonight on NBC and filmed in Studio 8H in New York’s Rockefeller Center, Bublé posted a video to his Twitter with one of his special guests from the show.

Bublé will be performing an array of holiday songs and comedy skits alongside his guest lineup of Camila Cabello, Jimmy Fallon, Leon Bridges, Ted Lasso star Hannah Waddingham, a 48-piece orchestra, and of course the Muppet Kermit the Frog:

Convinced my friend to hop-on this trend @kermitthefrog

Jim Henson’s Muppets main character Kermit the Frog posted a sweet reply to the video on his own official Twitter account, writing:

Good vibes and a great pal — talk about a wonderful day! Although I think I may have pulled something bobbing my head like that. Sheesh!

Good vibes and a great pal — talk about a wonderful day! Although I think I may have pulled something bobbing my head like that. Sheesh!

Bublé is no stranger to Christmas, with many fans calling his 2011 “Christmas” album the best holiday music on their festive playlists. The popular album has sold more than 16 million copies, and in November, the crooner released a “super-deluxe” anniversary edition of “Christmas”, with the new song “Christmas Sweater,” a duet with Rod Stewart, and an updated version of “Let It Snow” with the BBC Big Band Orchestra.

Inside the Magic cannot wait to see new music from the Candian singer, with a new album coming in Spring 2022!

The new show on the Omnibus sees Kermit, Miss Piggy, Fozzie Bear, Gonzo, Pepe the King Prawn and more Muppet characters performing classic Christmas songs such as “Feliz Navidad and “We Wish You a Merry Christmas” down Main Street U.S.A.

Are you excited to see Michael Bublé making friends with Kermit? Will you be watching his upcoming Christmas special?