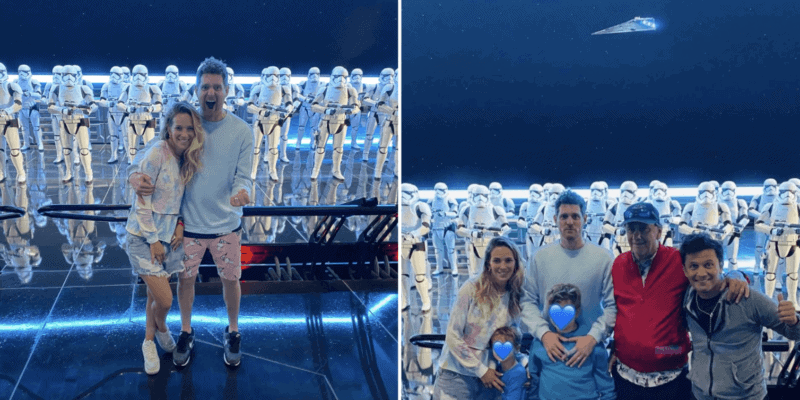 Disneyland had a tough year as the theme park remained closed due to the ongoing pandemic. As the state of the world began to improve, the theme park was able to open up at the end of April, and Guests could not wait to re-enter the gates, including many celebrities!

As the months have passed, we have seen that Disneyland Resort has seen many Hollywood stars at both Disneyland Park and Disney California Adventure. From Avengers Campus bringing in Marvel heroes such as Anthony Mackie and Paul Rudd to others who just wanted to see the new land like Megan Fox and Machine Gun Kelly.

We also have seen the Kardashians take over the theme park on a variety of occasions; Disney stars Aly & Aj stopped in, Olivia Rodrigo enjoyed the magic. Even Shia LaBeouf, who had a tough run while working with Disney, was at the parks for multiple days sporting some pretty epic Disney headgear.

It seems that pop/jazz sensation Michael Bublé went to see Star Wars: Galaxy’s Edge and could not get enough. Michael Bublé took to Facebook to discuss his day, and the singer was overjoyed.

Picture number 1 is me realizing I’m gonna poop my pants because this is the GREATEST DISNEY EXPERIENCE ever!!!
Picture number 2 is me trying to look cool and keep my composure.

Picture number 1 is me realizing I’m gonna poop my pants because this is the GREATEST DISNEY EXPERIENCE ever!!!Picture number 2 is me trying to look cool and keep my composure.DisneyDisneyland

Although this was not Bublé’s first Disney experience, he clearly loved it as he deemed it the greatest! In the above photos, we can see Bublé and his family rode Rise of the Resistance, one of Disneyland’s most popular attractions. The singer was freaking out after just seeing the Storm Troopers, so the attraction itself must have blown him away.

Bublé is a big Disney fan, having performed in the Disney Holiday Singalong, so we are glad that both he and his family could experience the magic, especially after the battle his son has faced with cancer.

What do you think of Rise of the Resistance? Do you feel the same way about the attraction as Michael Bublé?

Comments Off on Michael Bublé Says Disneyland’s “Greatest” Experience Is in Galaxy’s Edge!