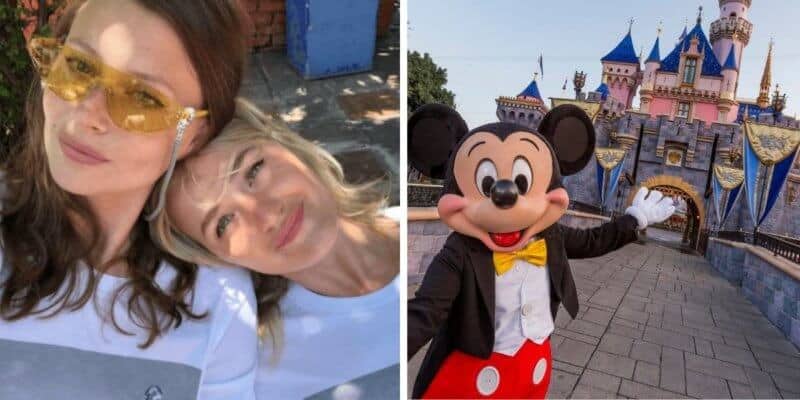 If you believe in magic, or perhaps you are going through a potential breakup and need a song for it, these two Disney stars will have your back! Sister-duo Aly & AJ left their mark on Disney after having multiple songs air on the Disney Channel and their concert, and the sisters have starred in Disney Channel Original Movies, such as Cow Belles.

Considering the two grew up in the Disney spotlight, it is understandable that even as adults, the sisters love to visit the Disney Parks! Now that Disneyland has reopened, we have begun to see many celebrities return, such as the Kardashian clan. However, it is always fun to see Disney stars return to the House of Mouse.

Yesterday, Alyson (Aly) Michalka and Amanda  (AJ) Michalka are at Disneyland, and they asked fans to come and find them! In a Tweet Aly & AJ (@alyandaj) said:

Enjoying the day @Disneyland …..come find us in the park if you can

Enjoying the day @Disneyland …..come find us in the park if you can ? ?

And, it seems that the duo was serious about fans coming to meet them as photos are beginning to surface online! JR (@zan047) Tweeted a photo stating:

Was so nice meeting you! Thanks for chatting for a minute!

Was so nice meeting you! Thanks for chatting for a minute! pic.twitter.com/zuUn01SacB

Also, the Disneyland Celebs Instagram showcased another photo of the Disney stars posing with two Guests visiting the park today.

Looks like the duo Aly and Aj were seen at Disneyland today! Thanks @samanthac.23 and @ali_christakis for the photo

Related: Disney Actress Breaks Silence on the Struggles of Stardom

We recently reported on Aly and AJ opening up and discussing what it was like to grow up under Disney’s spotlight. In an Interview Aly said:

“We happened to be artists on a label who were writing our own music, and there weren’t a lot of artists who were at that time. Miley [Cyrus] and Demi [Lovato], they had kind of come in right after us and I know they write their own stuff or at least collaborate with people. But we were kind of our own thing. We were a bit of an anomaly over there. And I think that’s why our time there was hard, because we were women, writing music, very young, asking to collaborate with people outside of our genre. The label was confused and taken aback by our brazen ambition. We had a lot of difficult conversations with them over the years and ultimately our partnership had to end because we just weren’t on the same page. But we’re very grateful for the launching pad they did give us”

To read more on that interview and what the sisters had to say, click here.

That being said, it seems that Aly and AJ are still faithful to their Disney fans, and anyone who had a ticket for yesterday was in luck because although meet and greets may be on hold for characters at Disneyland, Guests could have potentially met these Disney stars!

What celebrities have you seen at Disney World or Disneyland? Let us know in the comments below!

Comments Off on Two Huge Disney Stars Return to Disneyland