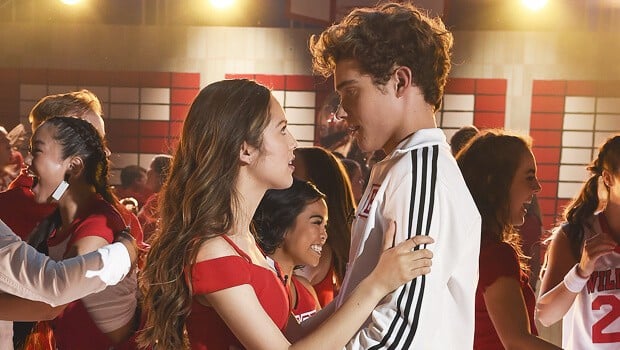 Olivia Rodrigo has been in the spotlight ever since she was a child. Growing up on Disney Channel’s Bizaardvark and now playing Nini Salazar-Roberts on the Disney+ series High School Musical: The Musical: The Series, Rodrigo is very well-known within the Disney community.

Now, the 18-year-old actress is speaking out on what it was like being a Disney child star and how it has affected her today.

In a new interview with ELLE, Rodrigo talks about everything from her newly released single “Driver’s License” to what it was like growing up in the spotlight with millions of people watching her.

The singer-songwriter’s performing days started at just four years old when her parents handed her a Tinkertoy set, which Rodrigo turned into a microphone stand. Despite no musicians being in her family, Rodrigo was born a star and a performer.

Her parents signed her up for voice lessons and within the next year, she began performing in talent shows, grocery stores, and other public places. This led to acting lessons and eventually, Rodrigo landed her first big gig — the American Girl movie, Grace Stirs Up Success (2015).

By the age of 12, Rodrigo began starring in the hit Disney Channel show, Bizaardvark. However, this is when she really started to feel lonely. Per ELLE‘s interview:

But it was lonely being a Disney star. “It’s a multicamera sitcom, so literally every set is within a yard of each other,” she recalls. “You just walk to the different sets.” As she turned 14—the middle school years—she experienced what she called “an identity crisis on steroids.” She was struggling with questions that every early adolescent confronts: “Who the f*** am I? Who cares about me? How do I treat people?” But there were some unique pressures: “Most 14-year-olds aren’t in a room with adults being like, ‘So, what’s your brand?’ ”

At the age of 15, she was cast as Nini in the (now hit) Disney+ series, High School Musical: The Musical: The Series, which is when she felt her social life was turning around as she found a “revelation”:

Socially, the show seems to have been a revelation. Rodrigo became part of a large, tight-knit cast, whom she describes on Instagram as “FAMILY!” It also created her first songwriting break.

This Disney+ series led to Rodrigo’s first songwriting hit, which also led her to build enough courage to post one of her own original songs to Instagram. This was a huge step for the Disney Channel star as it was a way for her to become vulnerable with her fans. According to ELLE:

In episode four, the script called for Nini to perform a song that she’s written. Meanwhile, the real Rodrigo had mustered the courage to post one of her own original songs to Instagram, a melancholy piece called “I Am More.” She describes it as “this very raw take” on a frustration she was feeling with the way people perceived her. On Instagram, she looked pretty and carefree, but that wasn’t the way she felt all the time. That’s the problem with social media: “It’s hard to be something that is not one-dimensional on a medium that is inherently one-dimensional, you know?” The song’s hook is “I am more than I could ever show / I am more than the girl you think you know.”

Once Rodrigo posted her original song, “I Am More” to Instagram, it led to Disney wanting her to write songs for her character and even caught the attention of Sam Riback, the head of A&R at Interscope, who is also part of Geffen Records, Rodrigo’s current record label.

Now, the singer-songwriter has a hit song titled “Driver’s License”, which has completely taken the radio by storm. However, the success of the hit song actually worried Rodrigo at first.

“I thought I was going to be really in my head, like, ‘I’m never going to write a song as good as that again,’ ” she says. But instead, the opposite has happened: “This song has given me a lot of confidence in my voice.” At the risk of triggering stressful memories, I bring up the brand question. Has she gotten any closer to figuring hers out? The answer is yes—sort of. “I think songwriting has really helped me home in on what I like about myself and my art,” she says. It has something to do with being honest and vulnerable and not contrived. “I just want to be effortless, I guess,” she goes on. “Whether it’s in my fashion or my songs or my social media, I want to just be like, ‘Yo, this is me. And I’m sometimes weird as f***, and I’m sometimes polished and put together.’ ” She adds, “I think that’s the antithesis of a brand.” But if history is any indication, a lot of people can relate.

“Driver’s License” is a self-reflective song about teen Olivia who finally gets her driver’s license and then drives through the suburbs as she thinks about a recent breakup. The song debuted at number one on the Billboard Hot 100 chart and even broke a Spotify streaming record.

However, many were quick to speculate who exactly “Driver’s License” was about. Many targeted Joshua Bassett, Roridgo’s costar in High School Musical: The Musical: The Series since the two were rumored to date in real life. The song also mentions a “blonde” who is “older than me”, who many speculate to be Sabrina Carpenter. ELLE stated:

When “Drivers License” came out, fans of the show pegged the ex-boyfriend in question as Joshua Bassett, Rodrigo’s costar, whom she is rumored to have dated in real life. The song also mentions a romantic rival, a “blonde girl” who’s “so much older than me.” This was thought to be another Disney star, Sabrina Carpenter. Soon, both Bassett and Carpenter released singles of their own—creating a triple-size version of the frenzy that used to accompany a new Taylor Swift album.

The good news is Rodrigo doesn’t let bother her — In fact, she says it is a “songwriter’s dream”:

What’s it like to have millions of people dissecting your love life in social media comment threads? Rodrigo responds with an earnest swoon of gratitude. “It’s truly any songwriter’s dream,” she says. She talks about the thrill of watching everyone from TikTok tweens to middle-aged ladies connect with the song. They’re responding to the fact that she’d bared her heart. “There’s something so powerful in being vulnerable and open, like, ‘This is my life, and I’m f****** sad.’ Or, ‘I’m insecure,’ ” she says. “That’s what makes songwriting so special.”

You can catch Olivia Rodrigo in Season 2 of High School Musical: The Musical: The Series when it hits Disney+ on May 14. Disney describes the first season as:

And in Season 2, here is what fans can expect, according to Disney’s official description:

In season two of “High School Musical: The Musical: The Series,” the East High Leopards, who are preparing to perform “Beauty and the Beast” as their spring musical, face off against rival school North High to win a prestigious and cutthroat student theater competition. Wigs are snatched, loyalties are tested, and ballads are belted.

If you are not yet signed up for the streaming service, you can get started by clicking here.

A post shared by HSM: The Musical: The Series (@highschoolmusicalseries)

Are you a fan of Olivia Rodrigo? Let us know in the comments below.