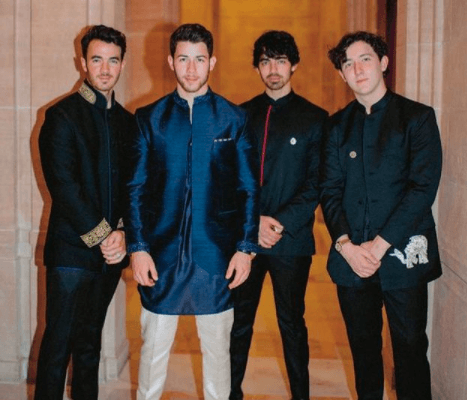 Nick, Joe, and Kevin Jonas — the three brothers who quickly became a pop sensation and a heartthrob brother band thanks to their success on the Disney Channel. But there is one other Jonas brother who isn’t as talked about — Frankie Jonas.

Now, in a new interview with Bustle, 20-year-old Frankie is opening up about his mental health, how he “always hated” the nickname “Bonus Jonas”, and how he felt his future “slowly died” due to the success of the Jonas Brothers.

Frankie is the youngest brother of the Jonas family — with the others being Kevin, Joe, and Nick Jonas.

As many of you know, the three older brothers formed a boy group called the Jonas Brothers, who had hits including “Year 3000”, “Love Bug”, and “S.O.S”. The brothers decided to step away from music for a few years, but recently reunited and started making music again. Now, they have additional hits on the radio today including “Sucker” and “What a Man Gotta Do”.

When Frankie was only five years old, his parents told him that they were moving from New Jersey to L.A. in order to help his brothers and their career. Per the interview with Bustle:

“They were like, ‘We’re going to move to L.A. for your brothers’ career.’ I had planned out my entire life in Jersey. I was 5, and I’m like, ‘I’m going to go to Princeton and be this college football star who comes back home and becomes an astrophysicist.’ That was my plan. And I watched it just fade to dust. My future just slowly died.”

After the family relocated, “it was kind of just decided that I’d act,” he remembers. “It was a conversation — I don’t remember it, but I’ve been told about it — regarding the fans of my brothers, who also had a similar kinship to me as this symbol, as this mascot. ‘Frankie could theoretically act. He could be in their shows. He can continue that legacy of that mascot-like character.’”

For those of you who grew up with the Jonas Brothers and that Disney Channel era, you probably recall Frankie Jonas making appearances at the concerts, and even landing his very own role in the animated film, Ponyo. Jonas starred alongside Noah Cyrus, the younger sister of Miley Cyrus.

This was a big step for the young Jonas brother, however, it wasn’t as glamorous as it may have seemed. In fact, Frankie Jonas explained that he was struggling with America referring to him as the “Bonus Jonas”.

“I always hated that nickname,” he told Bustle. “A lot of my problem with being in the public eye was that I was seen as this commodified vision of myself.”

When Joe Jonas, Frankie’s older brother, found out how he really felt about this nickname, he refused to call him “Bonus Jonas”. According to Bustle:

“I refused to call Frankie ‘Bonus Jonas’ after he opened up to me about how that was hurtful to him,” says Joe. “It completely makes sense, and we’ve had lengthy conversations and apologies behind closed doors that showcased my understanding and respect for his wishes. I think to feel like you are second, third, or fourth best from something is unfair; we are all equals.”

In the early-mid 2000s, the Jonas Brothers’ fame continued to skyrocket. In 2009, they signed on for a Disney Channel show called Jonas, which would be loosely based on their lives. This show followed the Disney Channel Original Movie hit, Camp Rock, which starred Joe, Nick, and Kevin alongside Demi Lovato.

But as the Jonas Brothers continued to pursue their careers, Frankie was struggling behind the scenes. In fact, as Frankie grew older, he told Bustle that he downloaded Twitter, which is where his mental health really started to take a turn.

“It was all pretty awful things for a 12-year-old to read,” he says. He remembers people making fun of his weight, which torpedoed his body image and self-worth. Others used the child as the butt of cruel jokes: “A lot of it was like, ‘If you ever feel forgotten, remember this guy.’ Or, ‘Frankie Jonas is a talentless sack of sh*t.’”

“It became a form of self-harm to look at these things,” Jonas says. “Then it became essentially an OCD, like a tic. I couldn’t stop. I checked it every day, and I had to, to feel OK in a way. It really became a serious issue for me. A lot of that perpetuated the idea that I was just this meme. I was this joke, and my entire identity to people was ‘adjacent,’ which really affected myself and the way that I thought about the world and the way I felt about myself.”

The youngest Jonas brother really struggled with self-image and self-identity, in which he felt like just running away from everything. He told Bustle:

“I became disillusioned with it all and feeling the way I was feeling,” he says. “I wanted to disappear, but I wanted to do everything I could to get back to that normal life that I thought I watched die. I wanted to run away from everything.”

But as Frankie grew older, and overcame these struggles, he is able to feel empowered. He found his way by using TikTok. If you aren’t familiarized with the social media platform, it is used to make a variety of short videos — anywhere from 15 seconds to one minute.

So how did Frankie find empowerment through TikTok? He told Bustle:

“Everything that I talk about on TikTok… no one knew that that was how I speak, how I express myself, what I think is funny,” Jonas says. “I was just making jokes, thinking no one was hearing them. And then people heard them and liked them. I thought, ‘I’m going to continue to do this,’ because I’ve never had my thing really. This feels like so much of my thing. It feels so empowering to have a thing.”

But even though he feels empowered on TikTok, it is important to remember that not everything is as it seems. In fact, Frankie opened up about how he often gets panic attacks after posting to TikTok.

Well, empowering and a little bit terrifying. He says he often has a panic attack after posting. “I have massive anxiety about everything I post because I don’t want to fail,” he says. “I’m someone who has spent his whole life wanting to be liked.”

So, what does his future hold? Well, Frankie explains that with everything he has overcome, he is still finding his way through life. He would still love to pursue becoming an astrophysicist, so he plans to focus on getting good grades and making his dreams come true.

And if you want to reminisce and watch the Jonas Brothers’ hit Disney Channel show, Jonas, or the Disney Channel Original Movie, Camp Rock, be sure to sign up for Disney+!

Do you remember Frankie Jonas? Who is your favorite Jonas brother? Let us know in the comments below.