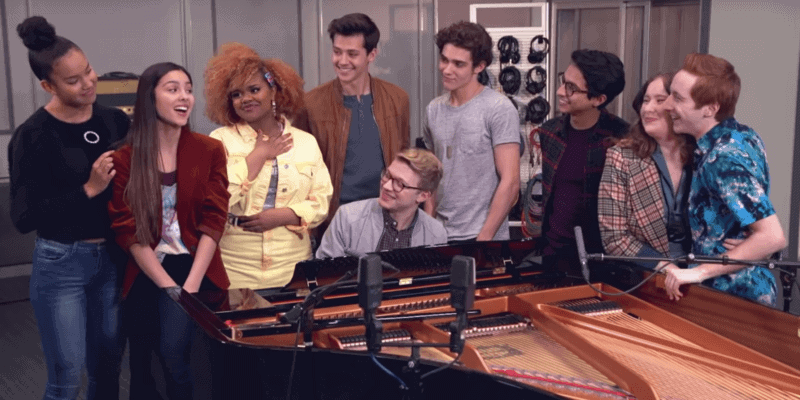 Yes, High School Musical: The Musical: The Series has begun production of season 2. But this time they are taking on a new show. The kids of East High will now attempt to pull off a “tale as old as time.”

Season 1 ended with the production of High School Musical, and a cliffhanger. All we knew was that Miss Jenn planning something big for their next production. Now we have confirmation that the big production was none other than Beauty and the Beast.

Related: BREAKING: Disney+ Release Month For “The Falcon and the Winter Soldier” Revealed

But rather than simply tell us what show they had in mind, the kids of East High made their announcement in a video you can watch here:

Season 1 introduced us to today’s talented students of East High School. While they worked to put on their own stage production of High School Musical, we saw each character grow and struggled through their relationships. Now, the stage is being set for next season’s show with Joe Serafini now confirmed to be a season regular on the show with returning stars Olivia Rodrigo, Joshua Bassett, Matt Cornett, Sofia Wylie, Larry Saperstein, Julia Lester, Dara Renee, Frankie Rodriguez, Mark St. Cryer, and Kate Reinders.

But this next season has a very special connection with the show’s creator and executive producer, Tim Federle.

“The outpouring of love and support for season one has been incredibly exciting, and I’m thrilled that the Wildcats are putting on Beauty and the Beast in season two. It was one of the first Broadway shows I ever saw, when I was 14, and it’s got all the perfect metaphors for the high school experience: Do people judge me for how I look? What is true love? Will I achieve the future I dream of? And, perhaps most importantly, it’s got dancing forks.”

Season 2 of High School Musical: The Musical: The Series is officially underway. Inside the Magic will update our readers as soon as the release date is announced.

Related: Is Pixar’s “Monsters at Work” Coming to Disney+ Next Month?

What did you think of the first season of High School Musical: The Musical: The Series? Are you excited for season 2? Let us know in the comments!