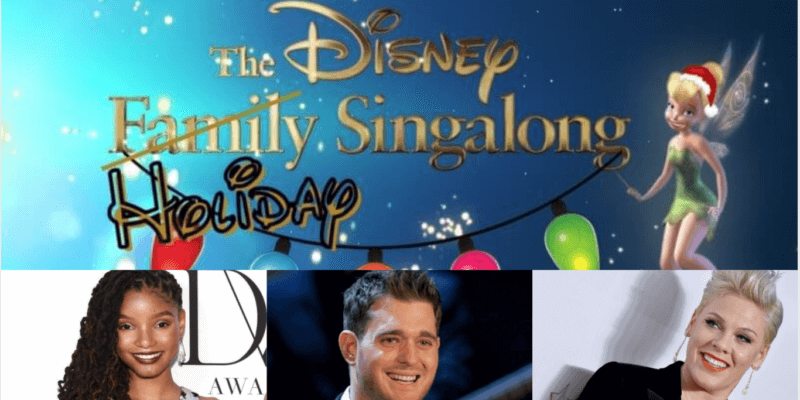 On November 30, ABC will present its third Disney Singalong special and first Disney Holiday Singalong, and we now know who will be making an appearance!

Fans will get their own front-row seat to performances by Andrea Bocelli, Michael Bublé, Adam Lambert, Chloe x Halle, Leslie Odom Jr., Katy Perry, P!NK, Kerry Washington, and so many others! As well as appearances from Disney Broadway and DCappella.

The Disney Holiday Singalong performances include the following:

BTS—“Santa Claus Is Coming To Town”

Michael Bublé—“It’s Beginning to Look a Lot Like Christmas”

Ciara—“Rockin’ Around the Christmas Tree”

Chloe x Halle—“Do You Want to Build a Snowman?”

Julianne Hough—“Whistle While You Work” and “Let It Snow”

Kerry Washington—“Joy to the World”

This magical hour-long special will begin at 8 pm ET.

Also included in this event will be Disney Broadway’s return to the stage for what is promised to be a tear-jerker.

D23 states, “grab a box of tissues as Disney on Broadway makes its heartwarming return to the New Amsterdam Theatre for the first time since March, with a sensational performance by members of the Broadway casts of The Lion King and Aladdin, and North American touring companies of Frozen.”

Disney Music Group’s DCappella will also be caroling throughout the night.

But the best part is that this is not even the full lineup! More appearances are expected to be announced at a later date, and we at Inside the Magic will update our readers as those additional appearances are confirmed.

Are you excited for ABC’s Disney Holiday Singalong? Which performance are you most looking forward to? Let us know in the comments!