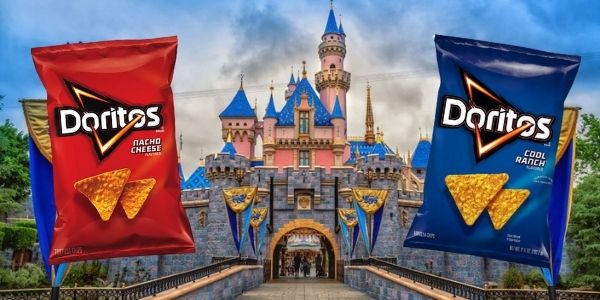 Nacho Cheese, Cool Ranch, Spicy Sweet Chili, Flamin’ Hot — Of course we are talking about the different flavors of Doritos!

Doritos are a staple for many Americans, especially during the Super Bowl, but do you know how this crunchy chip came to be? If we told you they were invented because of Disneyland trash would you believe us?

Well, it’s true! According to reports, Doritos actually came to be because of stale tortillas that were thrown out at Disneyland. It all began shortly after Disneyland opened in 1955. The founder of Frito-Lay got permission from Walt Disney to open a restaurant inside Frontierland at Disneyland Park, which they ended up calling “Casa de Fritos”.

Fritos were, of course, the highlight of this Mexican-themed restaurant as they were incorporated into many of the food items on the menu. Well, one day, someone noticed stale tortillas thrown out in the trash, to which, they suggested to fry the stale tortillas and sell them as chips, rather than throwing them away.

So, the cooks decided to try it out, added some seasoning to the fried tortilla chip — and they were a huge hit!

One year later, the new Vice President of Frito-Lay, Archibald Clark West, stopped into “Casa de Fritos” at Disneyland, tried the new fried tortilla chip, and the rest is, well, history. He decided to call them Doritos and made a deal with Alex Foods (which was the production company “Casa de Fritos” used) to produce them as a snack.

So there you have it! The iconic snack, Doritos, were actually invented thanks to stale tortillas that were found in the trash at Disneyland.

If you want to visit Disneyland or Walt Disney World on your next family vacation to visit the theme parks, but aren’t sure where to begin planning then don’t hesitate to contact our friends over at Academy Travel. They will be with you every step of the way! Get your free quote today.

Comments Off on Doritos Were Invented Because of Disneyland Trash