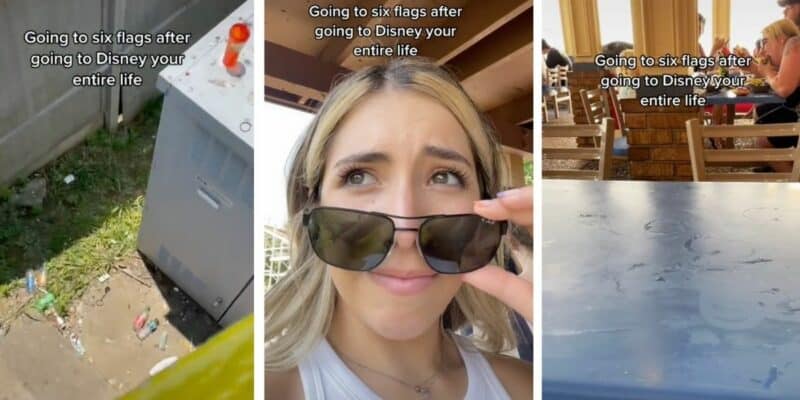 For Guests who grew up going to the Disney Parks, they may feel a little shocked when venturing out to a more regional-based park that does not attract hoards of tourists and hospitality workers alike.

At Walt Disney World, Disneyland, and all of the International Disney Parks, Guests are often met with an exceptional level of cleanliness and care. Cast Members are trained to ensure that Guests are having a magical day, creating magic moments whenever they can. Custodial Cast Members are also always located all over the Park, picking up any garbage they see and ensuring that trash bins are never over-flowing.

Walt Disney made it so that trash bins are only a few feet away from Guests at any given point, and Guests cannot buy gum at any Disney Park, in order to prevent gum from being spit out on the floor and making a mess. When it comes to “dirt” I would probably have to say that Tower of Terror or Haunted Mansion remain the dustiest, but considering Disney has a specific way to clean both attractions so that the fake dust remains, and the real dust goes away just shows how prolific they are when it comes to clean appearances.

Related: Disney Hotel Housekeeping Options for Stays Amid the Pandemic

There are a ton of other, more regional theme parks that are very fun for Guests to enjoy; however, not everyone has the staffing and funding to ensure that everything is looking nearly brand new all of the time. Sophia (@sophiaiespinosatv) is a big Disney fan who grew up at the Parks her whole life. After taking a trip out to Six Flags, she seemed to shocked at the differences of the Parks.

No one told me to have a magical day, never again

No one told me to have a magical day, never again #disney #sixflags #stlouis #disneyworld

In the TikTok, we can see Sophia has shown a lot of dirty areas with trash on the floor, as well as unthemed trash bins.

If you are looking to visit a Disney Park and experience the level of magic that Sophia seemed to be missing, you can pick from the following:

As a theme park junkie myself, I personally have a fantastic time at any theme park and can understand that not everything will be on the same standards as Disney (plus, they usually have much cheaper price tags). That being said, seeing videos such as this definitely helps Disney fans remember and appreciate how special Disney is.

What do you think of theme parks that are not Disney? Are you still a fan?