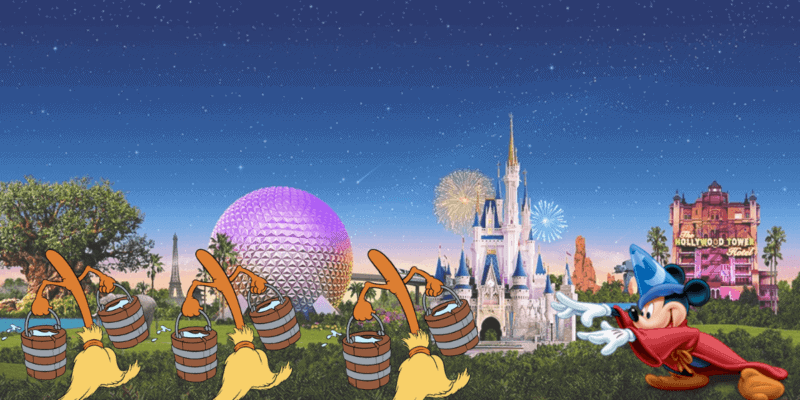 The Disney Parks around the world are temporarily. A guest’s well-worn sneaker or sandal has not stepped upon the magical thoroughfares of a Disney theme park at Walt Disney World or Disneyland Resort in over a month. Still, Cast Members are still hard at work keeping the parks at Disney’s standard of cleanliness.

Proof of their continued work comes from a short video clip shot from a local news helicopter. We see at least one Cast Member hard at work power washing the walkways of Toy Story Land at Disney’s Hollywood Studios.

It looks like Disney is taking some time during these park closures to do a bit of cleaning. This was earlier this afternoon at Toy Story Land.

Yes, powerful storms swept through Central Florida just a few days prior. They most likely warranted this work. But it still warms the heart to see a place loved by so many people still taken care of. Despite the furloughs, there are still some Cast Members coming to the parks right now to keep them ready for the day they finally reopen.

When it comes to Cast Members, there are those whose work is done what they call “On Stage.” Those are the characters, the performers, food vendors, cashiers, ride operators, and everybody else who comes face to face with Guests during normal park operations.

But there are those Cast Members who work “off stage.” These are the Disney employees that we almost never see. They make sure the parade floats are operational, they pack and prepare the fireworks displays, they keep the rides operational, and they ensure the park is as clean as can be before the guests arrive in the morning.

Walt Disney World, Disneyland, and every Disney theme park and resort around the world are in pristine condition thanks to the hard work of scores of Cast Members we will probably never meet, no matter how many times we visit the parks.

This video’s behind the scenes look gives us a bit of a look into that “off-stage” world, and is a heart-warming reminder of those Cast Members that are so often forgotten because we never see them.

So, on behalf of everyone here at Inside the Magic, thank you, Cast Members, for everything you do to keep our favorite places in such beautiful condition.