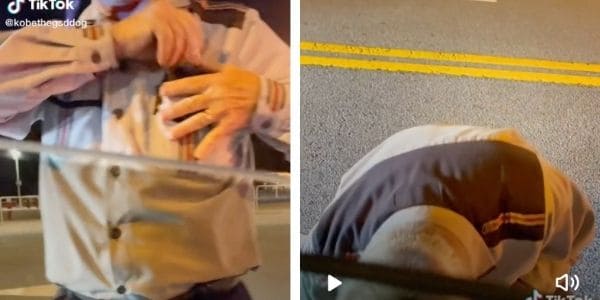 It is no surprise to say that Disney can oftentimes end up flooded with cars. With so many Guests entering and exiting the Parks at every moment, on top of Disney’s transportation doing the same, it is easy to end up lost in the shuffle of cards. That being said, Guests must always be aware of where they are driving to ensure that they are not in the wrong lane, or blocking others.

Recently on TikTok, a Guest shared a video that shows a Disney Cast Member leaning toward the Guest’s car while at one of the Disney World Park’s parking lots. The two have an altercation and argue about having the Guest roll their window down. The video starts after the exchange has already begun, making it difficult to determine what really happened between them

Kobethegsddog (@Kobethegsddog) posted a video of the altercation. See the full video below:

While not much is shown in the video, the Guest went on to explain the situation in the comments. The Guest claims that the Uber lane into the Park was backed up and one of the Resort bus drivers came over and allegedly yelled at the Uber drivers blocking the road. While there is no proof this happened, the roads into the Parks tend to get congested late at night, and it is typical for buses and cars to be “backed up” as the Guest claims.

What could’ve happened is that the Uber driver who posted the original video had somehow blocked a bus lane, causing the driver to approach the car. It is not known what started the heated altercation or why the Guest started to yell. From what it looks like, it seems that the Guest may have simply been upset for potentially being in the wrong. The Guest noted they were mad that the Cast Member knocked on their car window, however, that would be the appropriate way for the Cast Member to get the Guest’s attention. We can see the Cast Member simply walking away to diffuse the irate Guest.

If you are visiting Disney World and a Cast Member directs you in any way, please be aware that they are simply doing their job and have been trained to do so.

Have you ever seen a Cast Member be carried away like this? What’s the weirdest encounter you’ve had with  Disney characters at the Parks? Let us know below!