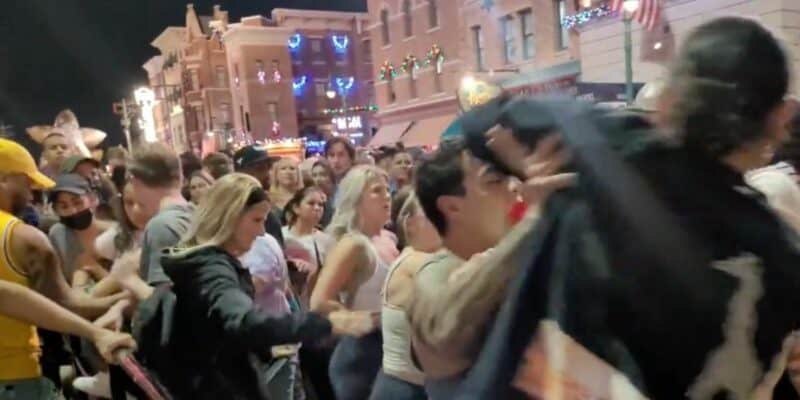 Although the holidays are typically a time for joy, laughter, and cheer, it seems that not everyone was experiencing those feelings at Universal Orlando Resort yesterday.

Universal Orlando Resort is gearing up for a magical holiday season, as all of its Christmas offerings are finally returning. Universal has announced all of their Christmas offerings which will last 51 days, beginning November 13 through January 2. Below is a full list of all the offerings that Guests can expect this year at Universal Orlando Resort. Considering last year’s holiday season was heavily impacted by the pandemic, it is great to see that Guests will be able to enjoy all of the offerings once again!

Ethan Hershaft (@EthanHershaft) took to Twitter to post a video of a fight that broke out at the parade time. In the video, we can see that two Guests were involved in the altercation, while another tried to split them apart. There was a verbal confrontation and some physical aspects, but thankfully, things did not escalate to severe violence.

The parade was awesome @UniversalORL but this fight was uncalled for! pic.twitter.com/vJM00o8Q1N

The Tweet had others talking on Twitter, commenting on the situation, while some others noted that this was not the only instance of aggression at the parade.

Park Lore (@ThemeParkLore) seemed to be at the parade as well and thinks that the crowding of the sidewalks is causing frustration among Guests.

This is literally the corner I tweeted them about lol. Honestly the fact that TMs aren’t keeping sidewalks open for moving traffic trapped a LOT of people. There was a TON of frustration, people shoving, arguing, cussing, trapped in the dead end between Fallon and Tribute Store.

This is literally the corner I tweeted them about lol. Honestly the fact that TMs aren’t keeping sidewalks open for moving traffic trapped a LOT of people. There was a TON of frustration, people shoving, arguing, cussing, trapped in the dead end between Fallon and Tribute Store.

We also saw a fight break out during the Halloween Horror Nights season, knocking over multiple barricades and causing quite the scene until security got involved. Of course, arguments and altercations can break out anywhere, and these instances are not at all specific to Universal. The Guest who took the video noted in the thread of the Tweet that they took a survey at Universal in order to alert the theme park that this happened.

If you are planning on visiting Universal Orlando Resort, always be sure to follow their rules and regulations and respect the Team Members who are enforcing them. If you choose not to do so, you may be removed from the Park or have further and more severe consequences.

To read on the theme park’s policies, click here.