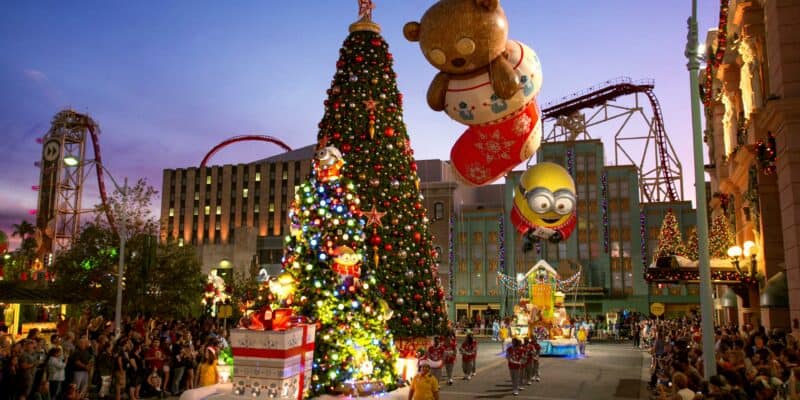 If you think that Halloween is just getting started, get ready to shake things up a little bit because Universal is prepared to send chills to their Guests.

Although Universal is in the middle of one of their most popular yearly events, Halloween Horror Nights, Guests and fans are always excited to know what is coming next for the theme park. As many plan their vacation in advance, knowing what to expect will not only help build excitement but can help entice Guests to visit Universal Orlando Resort.

Now, Universal has announced all of their Christmas offerings which will last 51 days, beginning November 13 through January 2. Below is a full list of all the offerings that Guests can expect this year at Universal Orlando Resort. Considering last year’s holiday season was heavily impacted by the pandemic, it is great to see that Guests will be able to enjoy all of the offerings once again!

If you are a Harry Potter fan, get ready to celebrate the holidays in the Wizarding World!

Christmas in The Wizarding World of Harry Potter at Universal Studios Florida and Universal’s Islands of Adventure
The streets of Hogsmeade, Diagon Alley and London will become beautifully adorned with themed decorations, garlands and lights as the sounds of special holiday-themed performances fill the air. Guests can sip on hot Butterbeer while they listen to Christmas carols from the Frog Choir comprised of Hogwarts students and their giant croaking frogs, as well as the unique holiday hits of one of the wizarding world’s most popular singing sensations, Celestina Warbeck and the Banshees.

Guests can cap off their evening in The Wizarding World of Harry Potter – Hogsmeade at Universal’s Islands of Adventure to enjoy “The Magic of Christmas at Hogwarts Castle” – a spectacular transformation of Hogwarts castle with a stunning projection of holiday spirit and Christmas moments inspired by beloved Harry Potter films.

Of course, there is no Christmas at Universal without the Grinch showing up!

Grinchmas at Universal’s Islands of Adventure
See the maven of mischief himself during Grinchmas at Universal Orlando where guests can enjoy the “Grinchmas Who-liday Spectacular” – a hilarious live retelling of Dr. Seuss’s holiday classic “How the Grinch Stole Christmas” starring The Grinch with special appearances by the merry Whos from Who-ville.

Universal’s Holiday Parade featuring Macy’s at Universal Studios Florida
With the return of Universal’s Holiday Parade featuring Macy’s, guests can experience the excitement as more  than 30 larger-than-life balloons take the streets of Universal Studios Florida, along with appearances by the Minions from Illumination’s Despicable Me and other fan-favorite characters from DreamWorks Animation’s Shrek and Madagascar. This parade also features beautifully decorated floats and hundreds of festive performers that fill the streets with holiday cheer. And guests won’t want to miss the spectacular finale led by the one and only Santa Claus as he passes by and lights the breathtaking 80-foot Christmas Tree that has become a holiday icon at Universal Studios Florida.

On top of all of that, Guests will have exclusive food and merchandise offerings to choose from. There truly is so much that Universal Orlando Resort is offering this holiday season, which has up itching for November, even though we don’t want Halloween Horror Nights to come to an end!

Are you excited for Christmas at Universal? Let us know in the comments below!