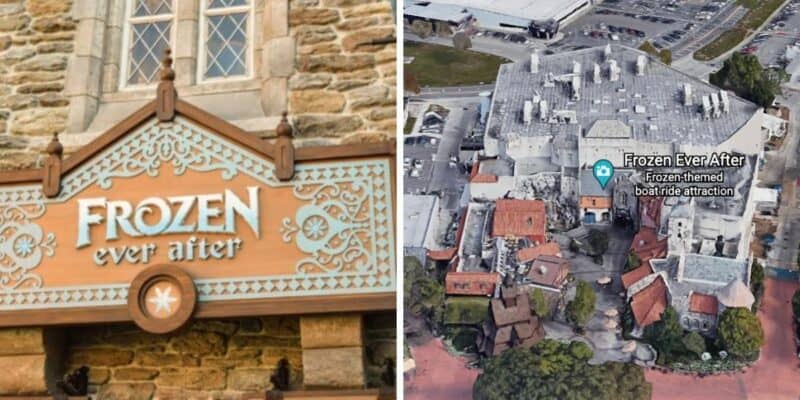 Frozen Ever After is one of the most popular attractions at EPCOT in Walt Disney World as it takes Guests into the story of the 2013 animated film. The attraction replaced Maelstrom a few years ago due to its overwhelming popularity and to help draw more Guests into the Norway pavilion.

In fact, did you know that Frozen Ever After compromises a majority of the pavilion due to its overwhelmingly large show building?

In case you weren’t aware, many Disney Parks attractions have large show buildings. These show buildings are a necessity to house an attraction that lasts as long as, say, Splash Mountain, The Haunted Mansion, or Pirates of the Caribbean without taking away from the attraction’s facade.

Basically, rides such as Splash Mountain, Pirates of the Caribbean, or Frozen Ever After needing a lot more space to tell the full story, but utilizing giant industrial-looking buildings are, of course, not pleasant to look at and will take away from the theming that Disney is known for. So, in order to make this work, these show buildings are often hidden from Guests’ views to preserve the Park’s magic.

In both the images above and below, you can see just how massive the Frozen Ever After show building is. It is so big that it practically takes up a majority of the Norway pavilion! But you wouldn’t notice this when visiting the pavilion in real life since Disney does such a great job of utilizing the space and making things appear just the way they envision it.

Did you realize just how big the Frozen Ever After show building is? Let us know in the comments below.

If you want to visit Disney World to experience everything the parks have to offer but aren’t sure where to begin planning — Don’t hesitate to reach out to our friends over at Academy Travel.