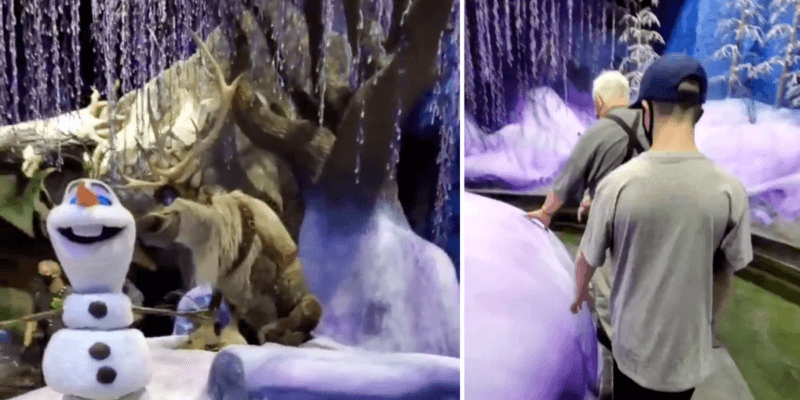 At Disney World, it’s no secret that attractions tend to break down due to technical issues, and when they do, it can of course lead to some disappointment for Guests. One attraction that is no stranger to the occasional breakdown is Frozen Ever After at EPCOT. Now, it seems the ride is once again down, and may not reopen today.

If we take a look at the My Disney Experience app, we can see that Frozen Ever After is temporarily closed.

A Guest also took to social media to share their experience.

Warning: The following videos show the attraction broken down with the lights on.

The attraction broke down while Guests were still aboard their boats. Drew the Disney Dude (@DrewDisneyDude) posted a video to Twitter where we can see that he was on Frozen Ever After as it broke down. He even stated that the boat did not move for 10 minutes.

Currently a very long delay on Frozen Ever After. Boats haven't moved in about 10 minutes. Line is already at capacity as well. #EPCOT pic.twitter.com/r9MvbARlUs

After approximately 20 minutes of standstill, it seems that Drew the Disney Dude had to be evacuated from the attraction. He shared the following on Twitter:

Finally got evacuated off Frozen Ever After after 20 minutes of being stopped. Shoutout to Reedy Creek Fire Department for helping everyone get off the boats safely. I was lucky enough to get this video of the Olaf scene. As far as I know this has never been on video before.

In the video below, we can see that the lights have come on in the attraction as Guests must walk along the ledge next to Olaf to evacuate the ride.

Finally got evacuated off Frozen Ever After after 20 minutes of being stopped. Shoutout to Reedy Creek Fire Department for helping everyone get off the boats safely. I was lucky enough to get this video of the Olaf scene. As far as I know this has never been on video before. pic.twitter.com/lgN0dgVTLe

Prior to the ride going down, the attraction queue line was reportedly capped due to crowds. However, this is not a common practice at Walt Disney World. In fact, Disney has not released any sort of statements that indicate that this is becoming a regular practice.

It is also important to note that Inside the Magic has not seen a line be capped before at the theme park. In fact, I, personally, have seen the queue for attractions like Flight of Passage extend all the way through Pandora and down the bridge towards Festival of the Lion King without hitting capacity. Inside the Magic will keep you posted on if lines do ever reach a capacity and if Disney does release a statement regarding this matter but again, at this time this is pure speculation.

If you are in the parks and want to ride Frozen Ever After today, be sure to stay tuned to the My Disney Experience app, as it will post the wait times and closure status in real-time. At the moment, we are not sure if the ride will be running again today.

Have you ever been evacuated off a Disney attraction before? If so, which one?