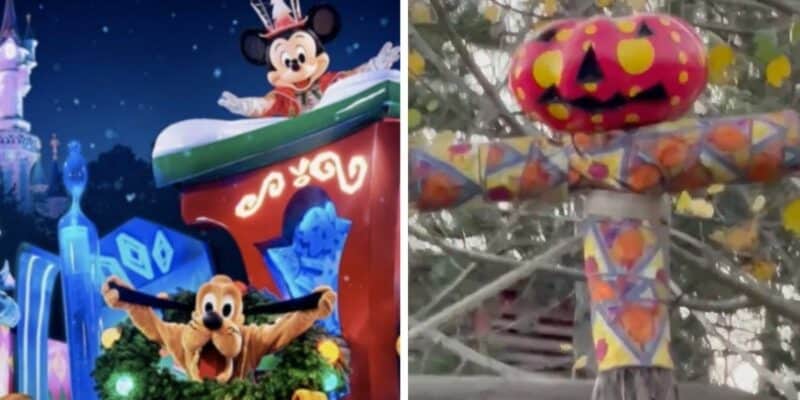 If you visit any of the Disney Parks around the world right now, you will see that the Parks are all decorated for the holidays. Each Disney Park celebrates in its own way, but one thing is unified, and that is that they all have magical decorations for Guests to enjoy.

At Disney World, Magic Kingdom, EPCOT, Disney’s Animal Kingdom, and Disney’s Hollywood Studios are all decked out. Magic Kingdom also is celebrating with Disney Very Merriest After Hours event where Guests can enjoy parades, fireworks, and a stage show on Cinderella Castle. Disneyland Resort is joining the festivities with their decor and their Disney’s Merriest Nights event.

If we travel to Disneyland Paris Resort, it truly is a winter wonderland at both Disneyland Park and Walt Disney Studios Park. Disney’s Enchanted Christmas has taken over the Park, but it looks like there is one Halloween pumpkin that refused to leave! As we have seen on Disney+ holiday specials, Disney tends to decorate their Parks overnight from Halloween to Christmas. Usually, we do not see anything left behind, but DLP Resort (@DlpResort) saw a pumpkin decoration still strapped to a post!

They forgot that one

They forgot that one 😆🎃 pic.twitter.com/RAGsDlrXLy

This was likely not an intentional mistake, and considering the scarecrow pumpkin is so high up, it is an easy one to miss! At the new Christmas event, Guests will be able to enjoy holiday entertainment, decorations, characters, delicious food options, and so much more! Plus, with Sleeping Beauty Castle being revealed more and more each day, there is even more desire to head back to the Park to see the newly refurbished masterpiece!

Disneyland Paris is currently undergoing a lot of changes as the Park preps for its 30th anniversary. Sleeping Beauty Castle has received a stunning refurbishment, and other areas of the Park are being updated to ensure they look brand new. Avengers Campus is gearing up to debut, and another extension will have both  Star Wars and Frozen included in the Resort!

Do you wish you could see Christmas at Disneyland Paris?