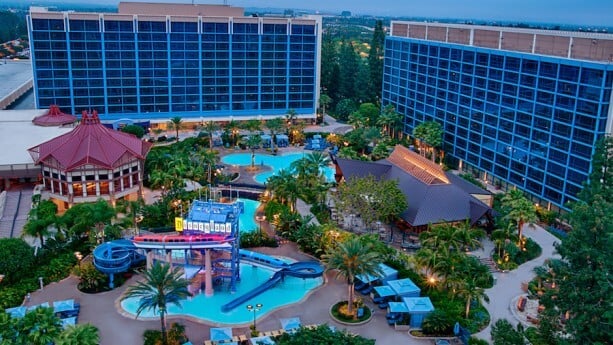 If you are visiting the Happiest Place on Earth and looking to stay right in the magic, look no further than the Disneyland Hotel.

From nostalgia to wonder, theme park views to Trader Sam’s, the Disneyland Hotel has it all, nestled right in Anaheim, California, the home of Disneyland.

Disney Parks submitted a permit and plan for a 12-story tower hotel adjacent to the existing Disneyland Hotel.

Walt Disney World did the same thing in adding a new property, Bay Lake Tower, beside the historic Disney’s Contemporary Resort near the Magic Kingdom.

At Destination D23, Chairman of Disney Parks, Experiences and Products Josh D’Amaro revealed updates on the proposed new DVC tower at the Disneyland Hotel in Anaheim.

The new Disney Vacation Club tower has no opening date as yet, but will feature 350 units, which Disney has broken down as:

Disney Imagineer leading the design of resorts around the world, Bhavna Mistry, explained the love that was “poured” into the new Disneyland Hotel tower:

“Everyone has seen the exterior rendering before, but there’s some added magic from Tinker Bell as she will greet you. We’ve been digging deep into what makes Disney’s stories special and to bring it all to life for you”.

At the D23 event, Mistry revealed a look at the pool area of the tower. Inspired by the artist’s palette, a very special foundational story is going to be told in the children’s play area. She continued:

“From the moment you step into this property, we’re bringing you a storytelling journey, one in which even the color palette we’ve chosen will be a meaningful part of the story. The story we’re telling is that from the perspective of the Disney artists, – the sketching, the animation style. For one special element, we even went as far as studying the sketching style of Walt Disney himself.”

In the bedroom, the inspiration is from Sleeping Beauty (1959). It’s immersive in a new way, designed to evoke the emotion and mood of the film. Everything in the room is part of the story.

Keep up to date with Inside the Magic for more updates on this new tower at Disneyland Resort in California!

Are you a DVC member and excited to stay in this new tower? Let us know!