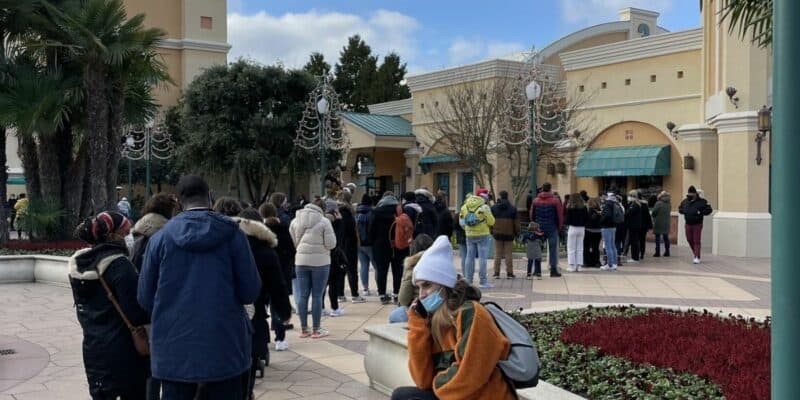 When Guests visit Disney World, they often rely on their MagicBand or credit card in order to make payments. In a world that has become so cashless with the pandemic as well as updated technology, many Guests may not even consider carrying money with them on vacation.

But, it seems that it may serve well for Guests to do so, as the unexpected may happen at any given moment. Today, at Disneyland Paris, Disneyland Park and Walt Disney Studios have undergone some technical issues with their credit card network. This has left Guests unable to make purchases, unless they had cash on hand. Because of this mishap, Guests have been seen lining up in long lines to take out money.

DLP Report (@DLPReport) posted a photo of one of the many lines that have been forming as Guests quickly scramble to take out some cash. From the Tweet, we can see that this is something that reportedly happens often.

🔧 The credit card network is down and long queues are forming at the ATMs. A Disneyland Paris tradition. pic.twitter.com/bhpQgk6hLJ

We have recently reported on quite a few changes that are ongoing at Disneyland Paris! The Disneyland Hotel is receiving some refurbishments, and at the moment, all of the lighting on the exterior of the building is being removed.  Walt Disney Studios is adding a massive addition that will include Star Wars, Marvel, and Frozen, as well as their very own Avengers Campus, which will be the first section to open in the Park. One of the biggest changes that we have seen is on Sleeping Beauty Castle, which was covered by a box facade for months. Recently, Disney began to uncover the castle to reveal a stunning, magical masterpiece.

Hopefully, the credit card network is able to come back online soon so that Guests no longer need to find ATMs to make their purchases.

Have you ever experienced this at any of the Disney Parks in the past?