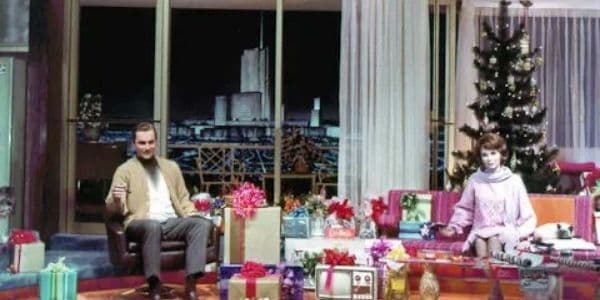 Although Walt Disney was not around to see some of his dreams come to life, we as Guests can feel his presence in a lot of the attractions that he had a hand in.

One of the attractions that Guests love in which Walt created for the 1964 World’s Fair is Carousel of Progress. Walt loved the idea of progress and the American family; with that, he wanted to create a stage show that would show Guests how technology has moved along as the years have gone by, and eventually what we can predict the future would be like. The attraction has gone through various iterations and locations, moving from Disneyland Resort to Walt Disney World Resort in Magic Kingdom.

Before it came to Disney World, the Disneyland version had the Progress family sitting in their final scene with a very familiar city behind them. Before EPCOT was a theme park, it was a Walt Disney idea to be the Experimental Prototype Community of Tomorrow. This would have been an actual city where people could live in that would be based on progress. It, of course, changed in style when it became a theme park, but at one point, the Progress family lived there!

History@Disney (@HistoryAtDisney) Tweeted a photo of one version of Carousel of Progress where we can see the family living in Walt’s idea of EPCOT, which is fitting as the ride is an original attraction that Walt helped create.

In this photo we see the Carousel of Progress finale from Disneyland (1967-1973).

Notice how the family is living in Walt Disney’s planned city of EPCOT.

This scene was changed when the attraction moved to Walt Disney World in Florida in 1975 where it remains today.

In this photo we see the Carousel of Progress finale from Disneyland (1967-1973).

Notice how the family is living in Walt Disney’s planned city of EPCOT.

This scene was changed when the attraction moved to Walt Disney World in Florida in 1975 where it remains today. pic.twitter.com/dy4IKGxbHd

As noted, the show changed when it came to Orlando, and this window view was removed. It does make sense to have removed it as Disney was gearing up to open the theme park EPCOT, which would contradict Walt’s version of EPCOT to a certain extent. For now, Carousel of Progress has remained untouched for quite some time. The finale scene is quite dated, so it would be interesting to see if the show sees an update. At the moment, nothing has been said by Disney, but there have been multiple mishaps with the animatronics in the show.

What would you like to see change in Carousel of Progress?