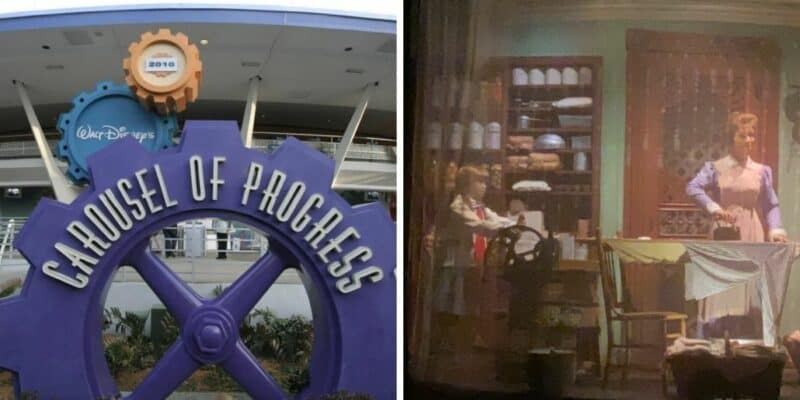 Both Images: Credit Inside the Magic

Guests are able to enter the rotating theater and follow an American family over four generations of progress and watch technology transform their lives. But there is one member of Carousel of Progress that only appears in one scene and is considered a “mystery” by many.

In act one, the audience is taken back to the 1900s as John, the family father, is sitting in his home with Rover, the family dog, by his side. John proceeds to highlight all of the new technology and appliances within his home, right before we meet John’s wife, Sarah. She shows off her new “wash-day marvel” and explains how she can now do laundry in five hours instead of two days.

Next to Sarah is a little girl washing clothes (as seen in the photo above); however, we are never introduced to her, unlike other family members such as their son James and daughter Patricia.

Additionally, this is the only scene that Guests can spot the little girl. This is unusual as we proceed with the show, we follow John, Sarah, James, Patricia, and even Uncle Orville, who is their constant houseguest. But we never see this little girl who was helping Sarah with the wash again throughout the duration of the show.

Many fans assumed that this girl was a neighbor of John and Sarah’s helping Sarah out with the laundry, while others thought it was their youngest daughter, but just never noticed or even thought about why she was never seen again throughout the show.

Unfortunately, this “mystery” girl on Carousel of Progress remains, well, a mystery as Disney has never released information or a statement on who exactly she is, but if you have any guesses, let us know in the comments below.

If you have any ideas on who this “mystery” girl is, let us know in the comments below.