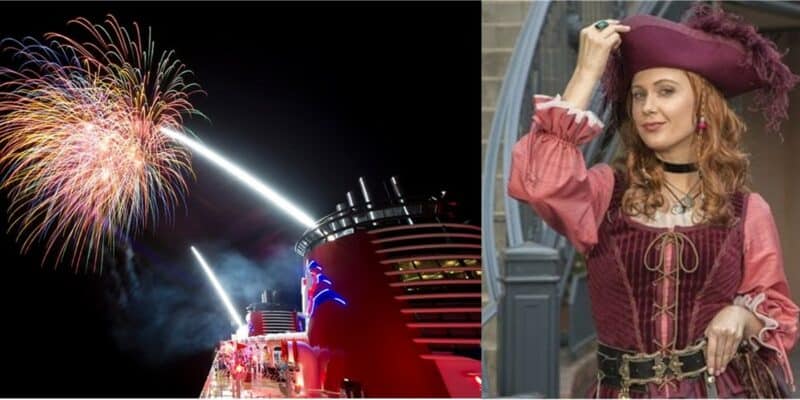 Remember back to 2018 when “We Wants the Redhead” was the biggest Disney trend? Disney announced they were closing the Pirates of the Caribbean attractions and changing the bride auction scene. The attraction reopened with the redhead as a totally new character – Captain Redd. Well, it looks like Captain Redd is now taking her crew to the high seas with the newest Disney ship!

We previously shared the news revealed during Destination D23 that the Disney Wish will host two new stage shows in the Walt Disney Theater. Disney announced:

“Disney The Little Mermaid,” an original Broadway-style reimagining of the Walt Disney Animation Studios classic with a modern and innovative take on a young woman learning the power of her voice. The show will feature dazzling special effects, innovative theatrical design, artistic choreography, and a reimagined script and score that will surprise and delight guests of all ages. “Disney Seas the Adventure” will follow Goofy as he discovers his own inner captain with the help of Captain Minnie and an all-star cast of Disney and Pixar characters.”

But, Disney isn’t stopping there! The Disney Wish will also host the Disney Cruise Line signature nighttime deck celebration of the Pirate Party… with a twist!

Disney Parks Blog has shared the news that the all-new way Pirate’s Rockin’ Parlay Party will join the lineup of Disney Wish entertainment!

Signature Pirate Night with a Rock-and-Roll Twist: Disney cruisers, rejoice! On one special night of every voyage, Guests of all ages can don their most swashbuckling pirate garb and head to the upper decks for a rollicking rock-and-roll extravaganza unlike anything on the high seas — complete with fireworks at sea like only Disney can do — during a new take on our signature nighttime deck celebration.

Hosted by Captain Redd — a descendent of the famous red-headed rogue from the Pirates of the Caribbean theme Park attractions — Pirate’s Rockin’ Parlay Party will feature live music, remarkable stunts, special effects, and plenty of surprises. Throughout the party, she and her band of head-banging buccaneers will perform famous radio hits from the genre, plus a rockin’ rendition of the classic pirate tune “Yo Ho (A Pirate’s Life for Me).”

When Redd assembles a fearsome council of captains, including the notorious scoundrel Captain Jack Sparrow, they’ll unlock a sparkling treasure that lights the night sky: a fantastic fireworks display underscored by an original arrangement of the sensational soundtrack from the Walt Disney Studios “Pirates in the Caribbean” films.

RELATED: How Far Would You Go For a Disney Cruise? This Woman’s Plea Goes Viral!

While the Disney Cruise Line fleet, including Disney Magic, Disney Dream, Disney Fantasy, and Disney Wonder, is filled with plenty of excitement, the newest ship in the fleet, the Disney Wish, will WOW when it makes its maiden voyage in summer 2022! New dining experiences, jaw-dropping Guest suites, water fun galore, and all sorts of entertainment… it’s going to be a cruise experience unlike any other.

Do you have plans to set sail with Captain Redd on Disney Cruise Line’s newest ship? Let us know in the comments!

Comments Off on You “Wants the Redhead”? Captain Redd to Host Party at Sea