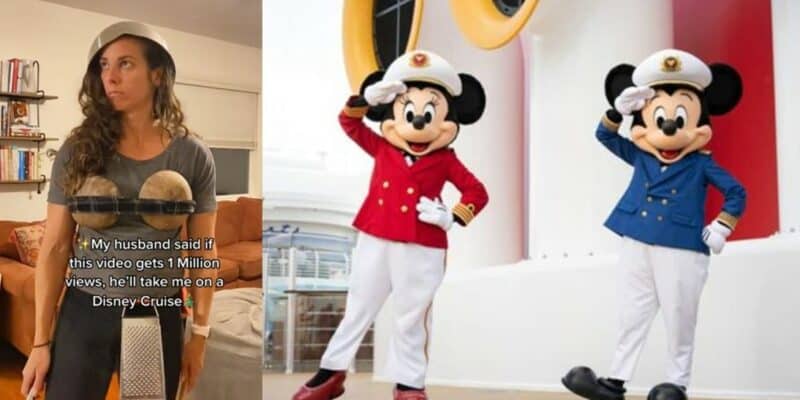 Think about it for a minute. How far would you go for a Disney Cruise? The Disney Cruise Line is known as being the best of the best in the cruise industry. The four current ships in the Disney fleet including Disney Magic, Disney Wonder, Disney Dream, and Disney Fantasy offer an exceptional experience, and the newest ship with a maiden voyage in 2022, the Disney Wish, is really going to take cruising to the next level. But, would you be willing to put on a silly outfit and dance for social media in hopes of going viral for a cruise? This lady sure did!

Griff and Alyssa @griffandalyssa are blowing up TikTok with all sorts of Disney Cruise videos. Before we get to the video that surmounted 12 million views and counting, check out her desperate plea for a cruise leading up to the big video.

We can relate to any extra money after the monthly budget is spent going towards Disney! And here’s another video where Griff pranks his Alyssa while she’s sleeping in the car:

But wait… apparently, this husband DOES have plans however to send his wife on a Disney Cruise! In the video below he reveals he bought her tickets months ago:

Griff didn’t put a stop however to Alyssa’s desperation! @griffandalyssa took to TikTok with the message, “My husband said if this video gets 1 million views, he’ll take me on a Disney Cruise.” Well, good news for her! Just three days in and the video has received 12.5 million views and counting. Having a video like this go viral… yep, we’d say this poor girl deserves a Disney Cruise!

That is some MAJOR Disney love right there! This video is then followed up with the video from when there were 8 million views, TikTok followers believed Alyssa should get 8 Disney Cruises! Now that she has 12 million views, does that mean TWELVE Disney Cruises? The hubby is surely rethinking this one!

We’re hoping their new TikTok videos are of the sweet couple at Port Canaveral preparing to sail away to Disney’s Castaway Cay on the big blue with the Disney Cruise Line.

How far would you go to set sail on a Disney Cruise? Let us know in the comments!

Comments Off on How Far Would You Go For a Disney Cruise? This Woman’s Plea Goes Viral!