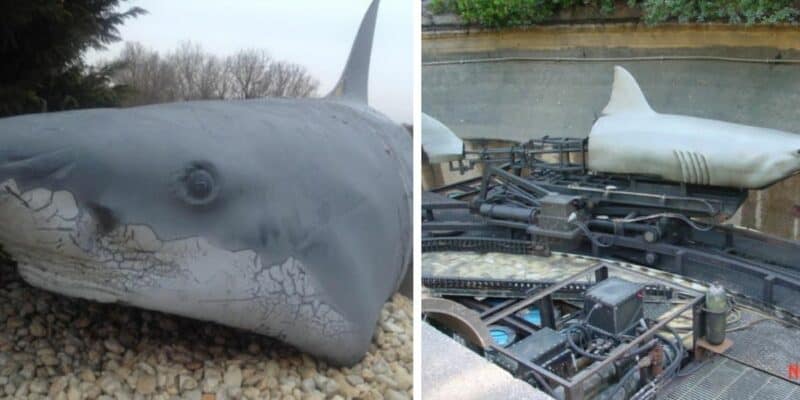 If you are a fan of the extinct and demolished JAWS attraction at Universal Orlando Resort, there is still a piece of the attraction that exits.

When JAWS shut down at Universal Studios Florida in 2012, fans of the film were devastated. The Steven Speilberg-inspired attraction was removed so that the Wizarding World of Harry Potter could also expand into Universal Studios Florida.  It also took up a lot of space in the area, which made it a prime candidate when it came to finding something to remove so that Harry Potter and the Escape from Gringotts (The Wizarding World of Harry Potter) could be built.

We recently reported some unearthed photos of the JAWS attraction from an aerial view which allowed us fans to take a trip down memory lane. If we think back to the attraction, one of the moments that, of course, stood out the most was when Bruce terrifyingly popped out of the water. Now, Guests can still have a small taste of JAWS (or, the other way around) as Bruce hangs near the old attraction entrance as a photo-op! There is also still plenty of JAWS merchandise available around the Park. But, where is the original Bruce animatronics that haunted the waters of Universal Orlando Resort?

Although the article cannot confirm it, there is a photo of the original animatronics, which looks identical to what we can see in this mysterious JAWS animatronic.  In the JAWS attraction, there were two sharks: a shark with only a top half for parts of the ride where the shark looks like it’s “swimming” towards the ride’s passenger boat, and then one that would pop out of the water and lunge at Guests. It seems that this animatronic lines up perfectly with the first animatronic.

Considering we once reported on Disney fans finding a Disney Monorail in the Nevada desert, the idea of finding a Bruce animatronic is not too impossible to believe.

What do you think? Was this one of the Bruce animatronics from the attraction? Let us know in the comments below!