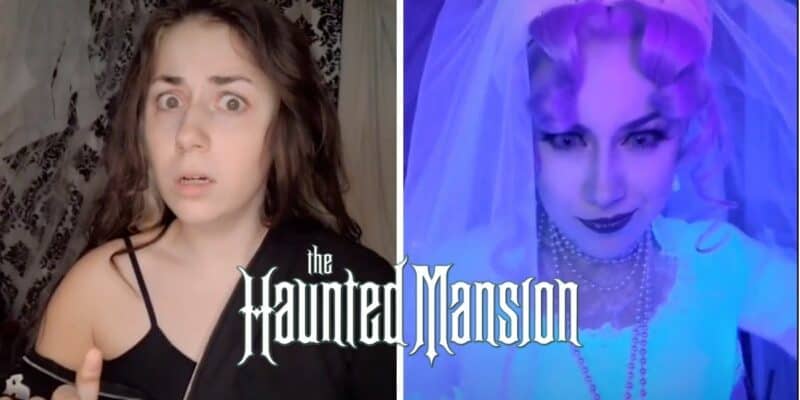 TikTok has been a social media sensation as many have found a new way to showcase their talents. From sharing Disney Parks secrets to showing off their dancing skills, TikTok is a place for many to open up and find others who have similar interests and talents.

Now, as we quickly approach Halloween, a new trend is taking over TikTok. Many users are taking to the social media platform to create videos to Insane Clown Posse’s “Chop Chop Slide” to the lyrics “Now Murder! Alright! Pull your hatchets out”.

For example, some change into some of the most iconic Halloween villains such as Michael Myers, Ghost Face, or Jason Vorhees as the lights flash and lyrics “chop, chop, chop” play, making for a very unique and fun creation. But one TikToker channeled her Disney side and created a video explaining that this was “literally made for our hatchet queen” — of course she is referring to Haunted Mansion’s Constance Hatchaway.

TikToker ceekayye decided to jump on this new trend and instead of changing into Michael Myers or Jason Vohrees, she changed into Haunted Mansion’s Constance Hatchaway, which fits perfectly considered she is known for the hatchet.

The transformation is actually quite perfect and we must say — she NAILED it! See the video here:

If you aren’t familiar, Constance Hatchaway, who is also known as The Black Widow Bride, is one of the 999 Happy Haunts within Haunted Mansion, which is located in both Disneyland in California, and in Walt Disney World in Florida. She was a beautiful woman who sought out wealth and luxary and married several rich men, including bankers and businessmen, and immediately murdered them after their wedding.

She can be seen holding a hatchet inside the Haunted Mansion, which is why the new TikTok trend is perfect for her!

What do you think of this TikTokers “Chop Chop Slide” video? Did she nail it? Let us know in the comments below.