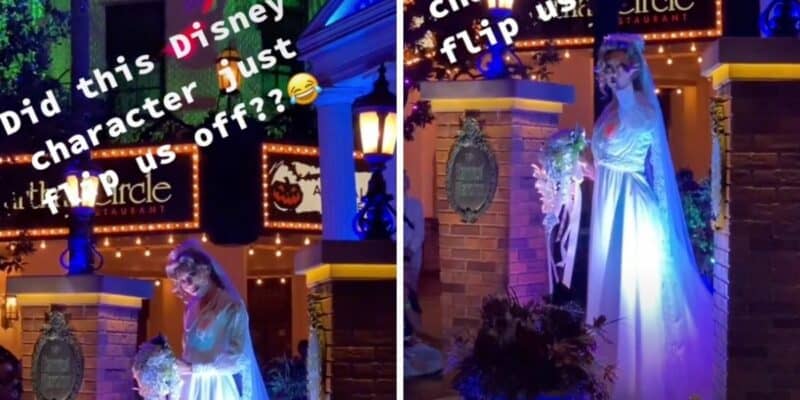 Both Images: Credit Screenshot via @aikilani

“Here comes the bride…” — The famous words spoken by the one and only, Constance Hatchaway, who is also known as The Black Widow Bride.

Constance Hatchaway is a fan-favorite character that appears in Haunted Mansion, but during Oogie Boogie Bash at Disney California Adventure, Guests can spot her in a parade as she rides past on the Haunted Mansion-themed float.

Well, during one of the Oogie Boogie Bash parties, Guests spotted Constance Hatchaway who may have been caught flipping Guests off!

In the TikTok video below of the Halloweeen parade, you can see that Constance Hatchaway makes hand movements that mimic a creepy vibe, almost enticing Guests to come join the 999 Happy Haunts. But as she moves her hand back towards her body, it almost looks like she accidentally leaves her middle finger up longer as the rest of her fingers go back in towards her hand.

Now, we are sure that “flipping” Guests off was not Constance’s intention and that this was a pure accident based on the way her hand happened to move, but it is still funny to watch!

Constance appears in the Frightfully Fun Parade, which Disneyland describes as:

Don’t miss this spirited masquerade cavalcade starring Mickey, Minnie and some of your fave Disney Villains!

Keep in mind that the Frightfully Fun Parade is only available to Guests attending Oogie Boogie Bash – A Disney Halloween Party, taking place on select nights from September 9 through October 31, 2021 at Disney California Adventure Park. A separate admission ticket is required for this special after-hours party event.

Constance Hatchaway, who is also known as The Black Widow Bride, is one of the 999 Happy Haunts within Haunted Mansion, which is located in both Disneyland in California, and in Walt Disney World in Florida. You can read more about Constance and her backstory here.

Have you been to Oogie Boogie Bash this year? What’s your favorite part of the event? Let us know in the comments below.