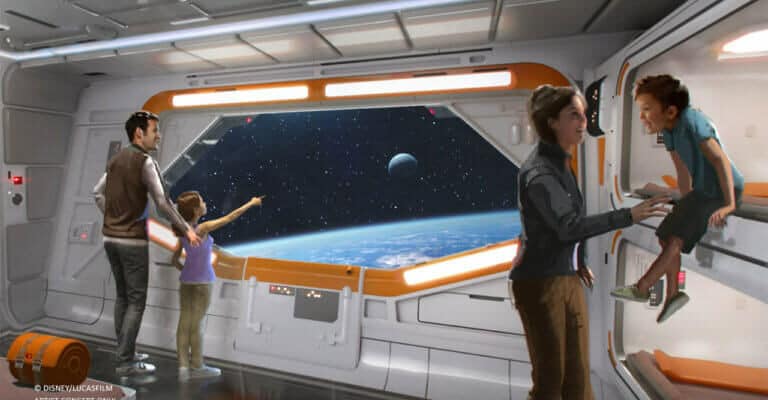 This just in! The maiden voyage for the Halcyon — AKA the Star Wars: Galactic Starcruiser, the all-new Star Wars cruise-like hotel experience at Walt Disney World Resort — has completely sold out.

The Star Wars hotel will be unlike any other Resort at the Florida Disney theme park destination. The Galactic Starcruiser hotel will transport Guests to a galaxy far, far away and take them on Star Wars adventures beyond their wildest imaginations.

Disney describes the Galactic Starcruiser as the following:

Despite the high price tag (it will cost your family thousands of dollars!), this all-inclusive Star Wars experience has led to plenty of bookings from fans who can’t wait to board the Halcyon. The Galactic Starcruiser is a first-of-its-kind immersive vacation for Star Wars super fans and those who love them, so it’s no wonder that Guests have been calling Walt Disney World to book their trips for March 2022 and beyond.

Guests could begin booking their trips aboard the Galactic Starcruiser as early as this week. However, now — following bookings by Golden Oak residents, Club 33 Members, Disney Vacation Club members, and Annual Passholders — the maiden voyage date (March 1, 2022) has sold out completely.

You can see on the official availability calendar below that there is currently no availability for the opening day voyage:

The above screenshot was taken just before 8 p.m. on October 7, so at the time of this article’s publication, there is still availability for voyages beginning March 3, 2022, onward.

Note that at this time, Guests wanting to experience the Star Wars: Galaxy’s Starcruiser hotel at Walt Disney World Resort in Florida can book by calling Disney directly. Early booking is currently open for select Guests, but booking opens for the general public on October 28.

While you cannot book through the Walt Disney World website, you can book through an Authorized Disney Vacation Planner — click here to more details.

Are you planning to experience the Galactic Starcruiser after it opens at Disney World in March 2022? Let us know in the comments!