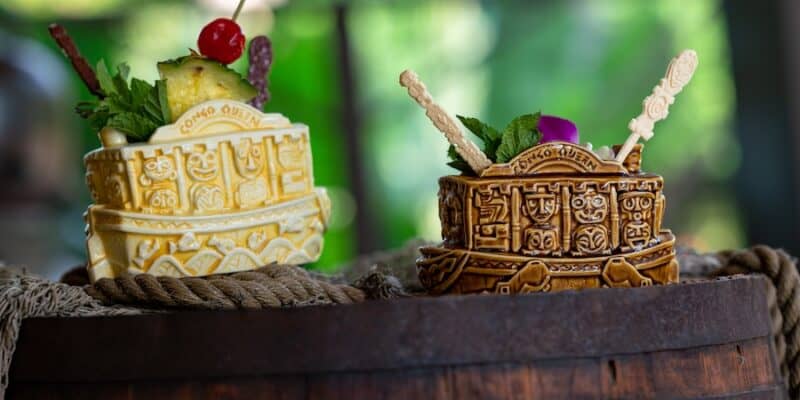 Hurry! If you’re a fan of all things Tiki, then you’ll want to get your hands on this new Jungle Cruise-inspired Tiki mug coming to Walt Disney World — TODAY!

Shaped like the Congo Queen boat, this brand new mug sails into Trader Sam’s Grog Grotto today, October 13. A limited release, this mug is only available while supplies last!

@WaltDisneyWorldResort! Available to purchase for your tiki collection beginning today, while supplies last.

“Missing Cargo” has been found at Trader Sam’s Grog Grotto at @WaltDisneyWorld Resort! Available to purchase for your tiki collection beginning today, while supplies last. pic.twitter.com/BuJCG0G99Q

This will be the first new Tiki mug to debut at Trader Sam’s Grog Grotto in the Polynesian Village Resort since the Tiki bar reopened following the pandemic shutdown.

Disney is ONLY selling this unique mug through wristband distribution. Distribution of these special wristbands will begin before Trader Sam’s Grog Grotto opens and will allow Guests to purchase up to two mugs per person.

Disney has brought out many souvenir Tiki mugs recently, including a new mug to celebrate Disney’s Haunted Mansion attraction back in September.

Another Jungle Cruise tiki mug set has been released through pre-order only through Tikiland Trading, and features a boat and a mug inspired by the “Indian Elephant Bathing Pool” section of the Disney Parks Jungle Cruise ride.

Before its reopening on July 19, fans had been waiting to enjoy a cocktail at Trader Sam’s for well over a year. The beloved lounge at Disney’s Polynesian Village Resort had remained closed as the hotel has undergone some extensive renovations. Rooms at the Polynesian have been transformed to include the characters and colors of the Disney animated film, Moana.

Disney also updated Trader Sam’s menu, and you can see all of those changes here. Trader Sam’s will no longer be offering its Poke Bowl or the Roasted Chicken and Pork Bahn Mi Sliders. Thankfully, the popular pan-fried dumplings have remained on the menu.

So if you’d like one of these special jungle Tiki mugs, head down to the Polynesian Resort as soon as you can!

Will you be trying to snag one of these new Tiki mugs from Disney’s Polynesian Village Resort? Let us know!

Comments Off on A New Tiki Mug Is Coming to Disney World TODAY!