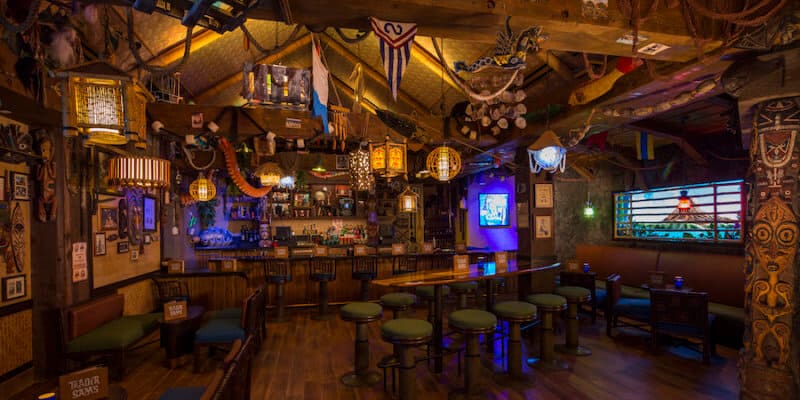 Located at Disney’s Polynesian Village Resort, Trader Sam’s Grog Grotto is a favorite among Walt Disney World Resort Guests and Disney fans alike. Unfortunately, the hotspot has been closed for over a year now. However, some recent changes to the Trader Sam’s menu could indicate that a reopening date is coming soon!

There have been a couple of food changes made to the Trader Sam’s menu, as well as a drink name change and some additions to the wine list. You can take a look at the new Trader Sam’s menu below.

Some menu alterations include the removal of multiple dishes from the menu. The Headhunter Sushi Roll has been replaced by the Kahuna Tuna Sushi Roll. The original Headhunter Sushi Roll had both Salmon and Tuna, but it looks like the new roll with just have Tuna. The name change also comes as both Disneyland and Disney World make changes to the world-famous Jungle Cruise to be more culturally sensitive.

Trader Sam’s will also no longer be offering its Poke Bowl or the Roasted Chicken and Pork Bahn Mi Sliders. Luckily, the popular pan-fried dumplings have remained on the menu.

While several dishes have been removed and replaced on the Trader Sam’s Grog Grotto menu, only small changes have been made to the popular and extensive drink menu. The biggest change has been a name change — the Shrunken Zombie Head cocktail is now known simply as the Zombie. The same name change was made to the Zombie cocktail at Trader Sam’s Enchanted Tiki Bar at the Disneyland Resort.

Disney updated the Trader Sam’s Enchanted Tiki Bar menu before the Disneyland Resort location reopened earlier this month. Disney also updated the Casey’s Corner menu before announcing that the Magic Kingdom restaurant would reopen. So, does the updated Trader Sam’s Grog Grotto menu mean that the bar will reopen soon at Walt Disney World? Only time will tell!

It is important to remember that, at this time, Trader Sam’s Grog Grotto does not have an opening date. The Walt Disney World calendar runs through mid-September and there are no hours listed to the Trader Sam’s schedule. However, that does not mean that the popular spot will not open before then. Inside the Magic will keep you updated to when an opening date finally comes!

Keep in mind that Disney’s Polynesian Village Resort will reopen its hotel rooms on July 19, and ‘Ohana also recently reopened.

Are you missing Trader Sam’s Grog Grotto? Let us know in the comments!

Comments Off on Trader Sam’s Update: Will the Disney World Location Reopen Soon?