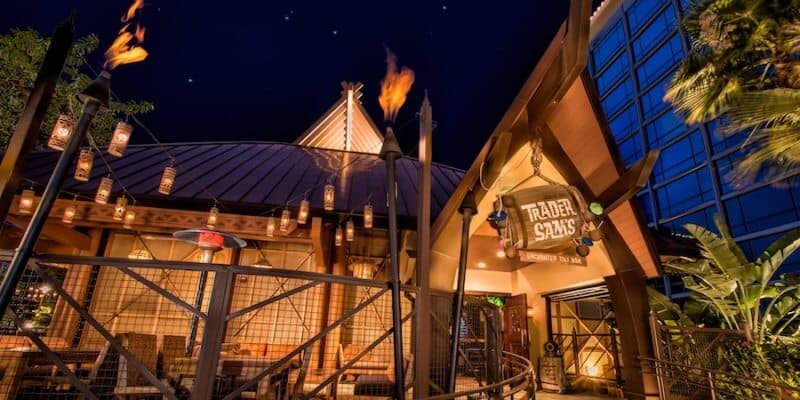 Disneyland fans received some exciting news today. A number of Disneyland and California Adventure dining locations would be reopening within a matter of weeks. Disney also once again confirmed the reopening of Trader Sam’s Enchanted Tiki Bar — the popular watering hole will reopen on July 2 along with the Disneyland Hotel where it is located.

Trader Sam’s Enchanted Tiki Bar is known for its fun drinks, tropical-themed menu, and fun staff who are known to make it rain when certain cocktails are ordered. The bar’s theme is also loosely inspired by Trader Sam, an icon from the Jungle Cruise attraction.

One thing that fans of the Tiki Bar may notice is the change to one of the drinks on the menu. What was once known as the Shrunken Zombie Head is still on the menu, but now it is listed as simply the Zombie. The drink remains the same — made with Appleton Estate Reserve Rum, Bacardi Reserva Ocho Rum, Hamilton 151 Rum, Tropical Juices, Falernum, and Cinnamon.

The change to the drink name comes in the wake of both Disneyland and Disney World’s world-famous Jungle Cruise attraction undergoing major overhauls. Disney has stated that they are reimagining several scenes within the Jungle Cruise ride in order to remove depictions of natives that they deem culturally insensitive. Included in the attraction revamp was the removal of the Trader Sam animatronic and the native party.

Jungle Cruise skippers commonly joked that Trader Sam was the “head salesman” of the jungle, and the animatronic at both the Disneyland attraction and Magic Kingdom attraction actually held shrunken heads. Trader Sam still has a presence in the attraction (though in a different way) and the bar is still at Disneyland Resort and Disney World, but the animatronic featuring the shrunken heads is no longer part of the ride.

Along with the Zombie cocktail name change, there also appear to be several items that are no longer on the Tiki Bar menu — including the Pu Pu Platter, the pan-fried dumplings, and lettuce cups. There are also several drink items that have been removed, like the Rosita Margarita and the Ka-Blue-Ie drink.

While they may not be on the menu at this time, it could be because Disneyland is simply limiting their menu offerings for a limited capacity crowd. Several menus at Disneyland Resort and Walt Disney World Resort dining locations were modified as the theme park resorts continued in their phased reopening process. These items could return to the Trader Sam’s menu at a later time, but right now it’s too soon to tell.

Are you excited to see Trader Sam’s reopen? How do you feel about the menu changes? Let us know in the comments!

CLICK HERE to book your adventure-filled Disneyland vacation today with our friends at Academy Travel!