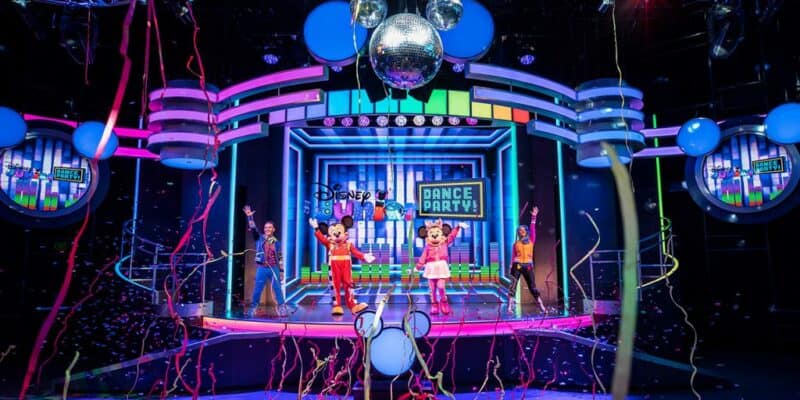 Disneyland Resort is bringing back even MORE live entertainment as part of the Southern California Disney Parks’ phased reopening.

Disney has just announced that a modified version of the Disney Junior Dance Party! will return to Disney California Adventure Park this Friday, October 15.

When it returns, “Disney Junior Dance Party!” will be presented in a modified format, including adjustments to the show to allow for physical distancing. We’ll also adjust how the audience is seated, with parents or guardians seated with their children, making for a much more fun family experience.

Disney Junior Dance Party! is a musically-infused, interactive concert hosted by Finn Fiesta and a DJ. During the high-energy show, you and your little ones will be involved in the fun, which includes live appearances from favorite characters, music from Disney Junior, and more. Sing, dance, and play along with favorite Disney Junior stars like Doc McStuffins, Mickey Mouse and Minnie Mouse from Mickey and the Roadster Racers, plus Vampirina from the hit Disney Junior series, Vampirina.

There are plenty of other attractions and experiences awaiting young families at the Disneyland Resort! The littlest of guests can join in and take flight on Dumbo the Flying Elephant, go for a spin on Inside Out Emotional Whirlwind, discover “it’s a small world,” meet beloved Disney characters and more. Recently, the 3D fantasy adventure “Mickey’s PhilharMagic” debuted a beautiful musical scene based on Disney and Pixar’s “Coco,” bringing even more joy to the show’s fan-favorite musical numbers – a hit with families.

Check out the video below as the stars prepare for their big day!

We are so excited to see more live entertainment coming back to the Disney Parks! Get ready to dance and sing along at Disney Junior Dance Party! this Friday!

Disney has also revealed that parades will be coming back in time for the merriest time of the year! A Christmas Fantasy Parade will be making its return to Disneyland when the holiday season kicks off on November 12, 2021.

Keep following Inside the Magic for more news on live entertainment returning to Disney Parks.

Are you excited to see more entertainment return to Disney Parks?