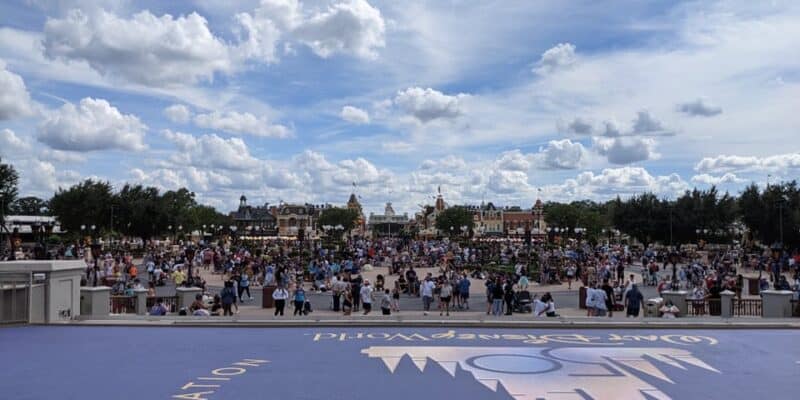 Today is the official 50th anniversary of Walt Disney World Resort! October 1, 2021, is the very first day of The World’s Most Magical Celebration, which will last a full 18 months. But as today is the very first day of all of the magical happenings and there is so much demand to be in the original Disney World theme park, Disney has to manage Magic Kingdom capacity.

This afternoon at just around 4 p.m., two hours after Park Hopping officially began for the day, the My Disney Experience app sent out a notification to Walt Disney World Resort theme park Guests letting them know the Park Hopping situation.

The Park Hopper option is temporarily unavailable at Magic Kingdom Park as we continue to carefully manage our attendance. For current availability, please call 407-560-5000.

We also found that Park Hopping limitations were even being communicated to Guests wanting to park at the Ticket and Transportation Center. Guests with Magic Kingdom reservations can park their vehicles and are given a red slip of paper to show that they were allowed to do so. However, Guests without Magic Kingdom theme park reservations are being turned away and are not allowed to park at the TTC.

Now, keep in mind that as long as you have a reservation for Magic Kingdom, if you are heading to the theme parks anytime today, you should be able to enter. However, if you have a Park Hopper ticket or an Annual Pass and your October 1 reservation was for another theme park, and you are not yet inside Magic Kingdom, then you currently cannot enter.

It’s good to see Disney making this announcement via the My Disney Experience app so that Guests looking to Park Hop are aware of the situation. This way, Guests without a Magic Kingdom reservation and are unable to Park Hop can spend some time enjoying other areas of Walt Disney World Resort during the 50th anniversary today.

Also note that this update comes two hours after Park Hopping began today. So, for a little while, Guests who did not originally have an October 1 reservation for Magic Kingdom but instead had one for another Park (and who had Park Hopper capabilities with their theme park admission) were able to Park Hop to Magic Kingdom with zero hiccups.

While Disney works to manage attendance at Magic Kingdom, we have noticed that the Park, while bustling with people, does not feel nearly as busy as it typically does on major holidays like Christmas Day and New Year’s Eve. This afternoon, there is still plenty of room to meander most areas of the theme park. Additionally, as many people are on the hunt for 50th anniversary food and merchandise, wait times for most attractions are very low!

We believe that Disney Cast Members are working to make the Magic Kingdom experience a magical and enjoyable one today. Stay tuned to Inside the Magic for more updates as we report live from the first official day of Walt Disney World’s 50th anniversary!

Update: As of around 8 p.m., an hour before Disney Enchantment was set to begin, Disney reopened Park Hopping to Magic Kingdom, per the official theme park capacity phone hotline.