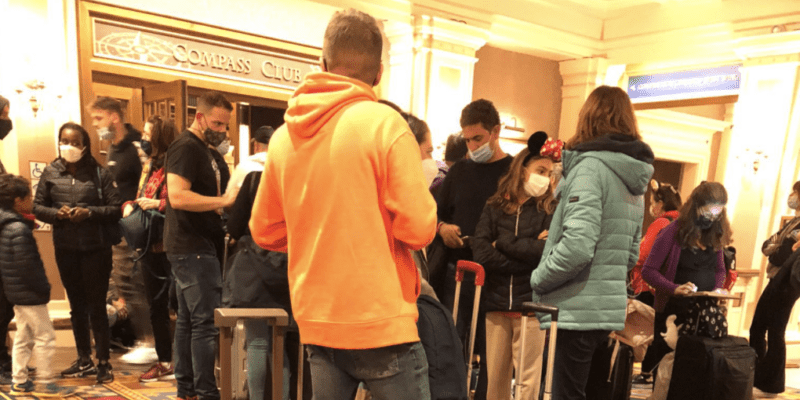 At the time the strike began, social media users like Disneyland Paris Guest shared details about the problems families were facing as the housekeeping staff — who work as independent contractors for The Walt Disney Company — protested their working conditions:

BREAKING: Due to a strike from the cleaning crews at DLP there were no available rooms for guests. Dozens of families are left for hours without a room. Kids are sleeping on the floor, the resort management does NOTHING.

BREAKING: Due to a strike from the cleaning crews at DLP there were no available rooms for guests. Dozens of families are left for hours without a room. Kids are sleeping on the floor, the resort management does NOTHING. pic.twitter.com/FtLObsqd7P

Now, Guests who plan to visit Disneyland Paris’s two theme parks — Disneyland Park and Walt Disney Studios Park — have once again taken to the internet to discuss details of the ongoing strike, and it seems that there is no end in sight.

Has anyone been to Newport Bay since the strikes? Is it running all mostly normal now? I have tried looking up info about what happened after the strike but there seems to be no clear resolution.

Has anyone been to Newport Bay since the strikes? from disneylandparis

Several other Disney fans responded, with one noting:

I arrived at the hotel on the day the strikes started. I was fortunate enough to be there precisely at 3pm, the earliest you can get a room, so our room was ready for us, but in the evening time (maybe around 8pm), when I was returning from the park the lines for check-in were long and the lobby was packed with new arrivals.

I stayed 3 nights at the hotel and our rooms were not cleaned until the very last night I stayed. The lines were also much manageable after the first night. The strikes are not yet resolved, but it seems Disney managing to get rooms ready for new arrivals, but over all cleanliness and regular room service is lacking

Another Guest shared that French strikes tend to be lengthy, so the hotel experience at Disneyland Paris may not be back to its normal standards anytime soon:

It is still not solved ! Strikes in France are long affairs

At this time, neither Disneyland Paris nor Walt Disney Company officials have spoken out regarding the strike, but it is clear that it is impacting Guests’ visits to Disney’s only European theme park property.

It remains unclear if the strike is impacting other Disneyland Paris hotels, such as the new Disney’s Hotel New York – The Art of Marvel hotel or the signature Disneyland Hotel. Disneyland Paris officially reopened on June 17, 2021 following its second pandemic-related closure.

Completely renovated as of Spring 2016, this 4-star hotel will immerse you even further into a luxurious coastal experience. Enjoy the charm of this 1900s coastal mansion nestled next to Lake Disney. Awash with maritime romance, this Hotel is just a 15 minute walk from the Parks, only a few minutes by free shuttle, and you can even enjoy extra magic in the Disney Parks.

What do you think about the Disneyland Paris strike?

Let the expert team at Academy Travel help you plan your next magical vacation to any of Disney’s destinations around the world, including Walt Disney World Resort’s four theme parks — Magic Kingdom, EPCOT, Disney’s Animal Kingdom, and Disney’s Hollywood Studios — and the Disney Springs shopping and dining district!