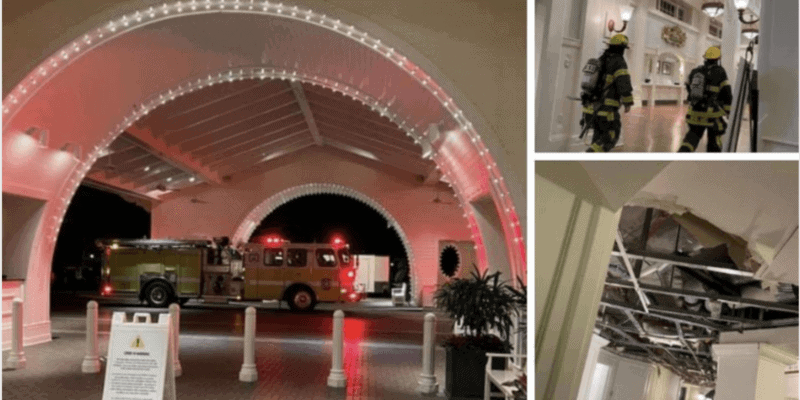 Disney’s BoardWalk Inn is a popular destination for many Walt Disney World Resort Guests. Unfortunately, last night, Guests’ stay was interrupted by some major flooding in the Disney Vacation Club area of the Disney Resort hotel.

It seemed like a crazy night at Disney’s BoardWalk last night.

4:07 [a.m.] excitement at the Boardwalk [sic: BoardWalk]. A pipe burst and there is 2+ inches of water in some hotel rooms on at least the second floor. Not sure if other floors are affected. Damage is relatively severe and a good chunk of the Boardwalk view rooms will be out of commission on the second floor. Somehow this tripped the fire alarms and a crowd is currently gathering in the hallway.

Another Guest questioned if the Resort hotel has always suffered from a leak problem, even before the pipe burst today:

Does the bottom floor of the DVC wing at Boardwalk have a water leakage issue? Fans all throughout The Screedoor [sic: Screendoor], and Big River has always been musty.

Does the bottom floor of the DVC wing at Boardwalk have a water leakage issue? Fans all throughout The Screedoor, and Big River has always been musty.

At this time, Disney has not released an official statement regarding the flood. Inside the Magic will continue to provide updates as they become available.

Experience the charm and whimsy of turn-of-the-century Atlantic City at this waterfront Resort hotel. Make a splash at Luna Park Pool and delight in a massage at the state-of-the-art fitness center. Discover carnival games, unique dining and exciting nightlife on the Coney Island-style boardwalk. Strung like saltwater taffy along the shimmering Crescent Lake, Disney’s BoardWalk Inn is located within walking distance to both Epcot and Disney’s Hollywood Studios.

Next time you stay, don’t forget to also check out the delicious BoardWalk Bakery for sweet treats!
Did you experience the flooding at Disney’s BoardWalk Inn today?
This article has been updated since it was originally published.
If you are interested in planning a Walt Disney World Resort vacation now or in the future, let the Academy Travel experts help you at no extra charge! They can help you make reservations for all four Disney World theme parks — Magic Kingdom, EPCOT, Disney’s Animal Kingdom, and Disney’s Hollywood Studios — and plan every magical detail that will make your trip memorable for years to come.