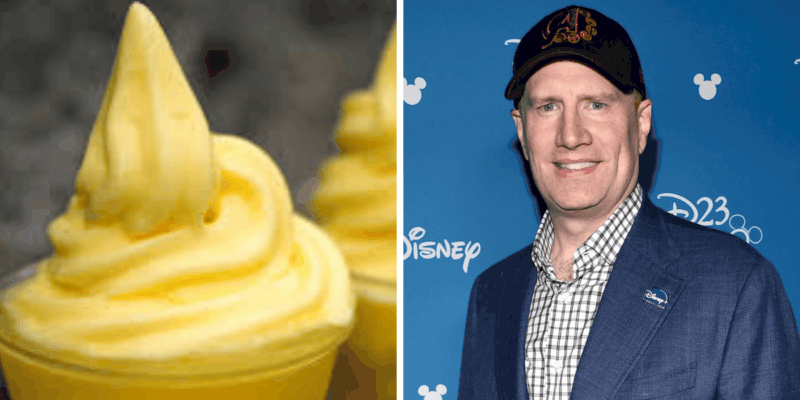 Dole Whip is a classic Disney treat — a delicious, refreshing taste of pineapple and adventure.

And it looks like for Marvel Studios President Kevin Feige, Dole Whip tastes of success.

It was recently revealed by The Hollywood Reporter that Disney gave Marvel a Dole Whip Machine after the incredible success of Avengers: Endgame back in 2019.

What could anyone possibly want more than that? Your very own Dole Whip machine, right from the “Mouse” himself!

In an interview, Kevin Feige commented on the relationship between Marvel Studios and Disney, and revealed the gift of a Dole Whip machine to the Marvel offices:

The report also reveals that during a recent annual retreat for the company’s upper management at Aulani, A Disney Resort & Spa in Hawaii, The Walt Disney Company Executive Chairman and former CEO Bob Iger wanted to leave everyone with one piece of advice, and that was not to let data control their decision, but rather, creativity.

Feige and current Disney CEO Bob Chapek are navigating a new world of entertainment and talent negotiations, highlighted recently by the legal battle between the Walt Disney Company and Scarlett Johansson. The release of Black Widow both in theaters and on Disney+ was argued by Johansson’s legal team as affecting her financial gain for the movie, as she was set to receive one-third of the revenue. Disney has since settled with the star, but it will be interesting to see how this affects future casting and Marvel releases.

Marvel Studios president Kevin Feige seems to be on Chapek’s side after Iger’s comments, believing he is more creative than others give him credit for. Feige said:

Only time will tell if Feige will receive any churros or Mickey Premium Bars after future MCU releases.

The epic conclusion to the Infinity Saga that became a critically acclaimed worldwide phenomenon, this dramatic showdown pits the Avengers against Thanos. After devastating events wiped out half the world’s population and fractured their ranks, the remaining heroes struggle to move forward. But they must come together to restore order and harmony in the universe and bring their loved ones back.

Would you want your own Dole Whip machine?