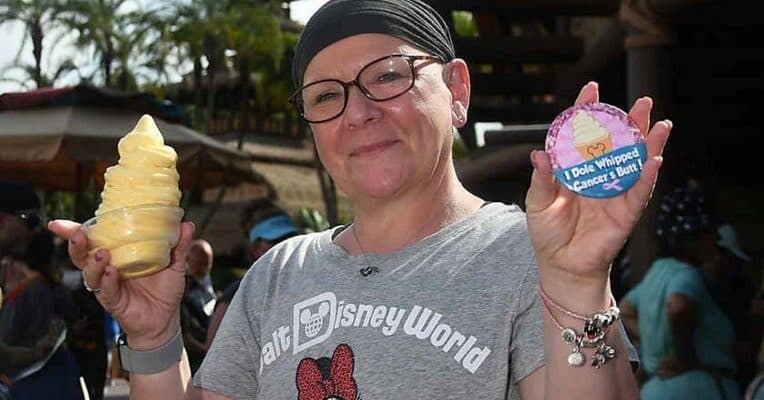 But when you’ve just overcome breast cancer, those magical moments become even sweeter.

Angela Kinsley Lawler, a Disney fan from New Jersey, received a special photoshoot on a visit to Walt Disney World Resort, incorporating her love for all things Dole Whip.

Angela was diagnosed with breast cancer in January 2021 and has since had a double mastectomy and chemotherapy treatment. She completed her last round in July, but is still receiving hormonal treatment every three weeks through March 2022.

“Although they have not said the word remission and I have not had any scans yet, I believe I am cancer-free — fingers crossed.”

She was able to go back to the parks after her last chemotherapy treatment, and wore a wonderful “I Dole Whipped Cancer’s Butt!” button. Angela asked a Disney PhotoPass photographer to take her photo outside of the Pirates of the Caribbean ride, and what came next made her feel like a “Dole Whip Princess.”

“He noticed my button and asked if we had a minute because he had something in mind. Of course, we said yes. As we waited for Adam to come back, I had no idea what he was planning. He asked us to follow him over to Aloha Isle. Once we arrived, I felt like a celebrity. He handed me a large dole whip and started the photoshoot.”

Angela is a huge Dole Whip fan, and who can blame her? In 2019, she attended Mickey’s Not-So-Scary Halloween Party in Magic Kingdom, and her costume? A Dole Whip, of course.

“My family is well aware of my love of Dole Whip, I always say I would eat it for breakfast, lunch, and dinner while at Disney.”

Disney Parks have always given people like Angela a way to celebrate or distract from their cancer battles, whether it be running the Walt Disney World Half Marathon for charity, or inspiring future Disney Princesses. This magical moment took Angela away from how difficult her battle has been, particularly during the COVID-19 pandemic when her husband couldn’t be with her during surgery.

Another Walt Disney World trip is on the horizon for Angela her family. She is hoping to return in May to celebrate her grandson’s first birthday, get his first haircut in Magic Kingdom, and introduce him to Mickey Mouse himself.

Oh, and of course, getting him his first Dole Whip!

Are you a big Dole Whip fan? What magical moments have you had from Disney cast members? Let us know in the comments!