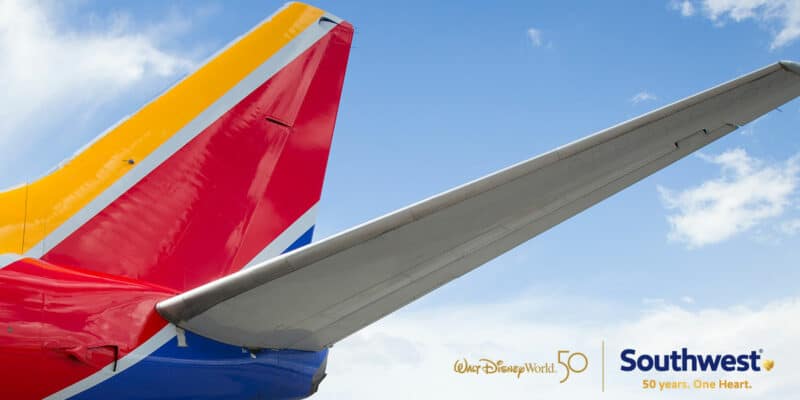 Disney often does collaborations with other companies regarding merchandise, and now, they are taking things up in the air!

As the 50th anniversary rolls around this Friday, October 1, at the Walt Disney World Resort, Disney is preparing to celebrate in a major way. We are now seeing transformations fill every Disney Park. EPCOT’s Spaceship Earth will soon debut its new Beacons of Light as well as Harmonious, Disney’s Hollywood Studios is going to add lots of shimmer to Tower of Terror, and Disney’s Animal Kingdom will project on Tree of Life, as well as debut Disney KiteTails, an all-new show! At Magic Kingdom, we have seen Cinderella Castle transform into a regal beauty; golden accents have been added throughout Main Street, U.S.A. and Fantasyland, and Disney Enchantment, an all-new firework show, will soon debut on October 1.

Even when Guests arrive at Orlando International Airport, they will be able to see the magic begin with decals on the airport monorail and photo-ops available at the airport. Now, it looks like Disney is taking things one step further to celebrate their anniversary with Guests traveling in.

As we can see on the bottom of the photo, the 50th anniversary logo for Walt Disney World is next to Southwest’s, so it seems that a partnership has taken place between the company and the airline. Although we do not yet know what to expect, we do know that Southwest is also turning 50, so this is a celebration that both companies are experiencing.

Personally, I am speculating that we will see Southwest planes flying into Orlando wrapped in a 50th anniversary Disney design. Of course, this is just a guess at this point. Still, since we have seen the Disney Skyliner, Disney busses, and Monorail all receive custom wraps for the celebration, a plane would be a great addition to the decorations.

Southwest has now updated its “secret” announcement! We can now see that one of the Boeing 737-700 aircraft will be decorated with Cinderella Castle and the 50th anniversary logo!

Meet the newest magical livery in our fleet! This Boeing 737-700 aircraft is a high-flying tribute to 50 years of both Southwest and @WaltDisneyWorld Resort connecting People to the magic and moments that matter most. #Southwest50 #DisneyWorld50 (1/2) pic.twitter.com/l2a3qVazGq

It seems that it will be just one plane at the moment, but perhaps we will see more over the next 18 month celebration!

What do you think of the new plane decor? Let us know in the comments below!