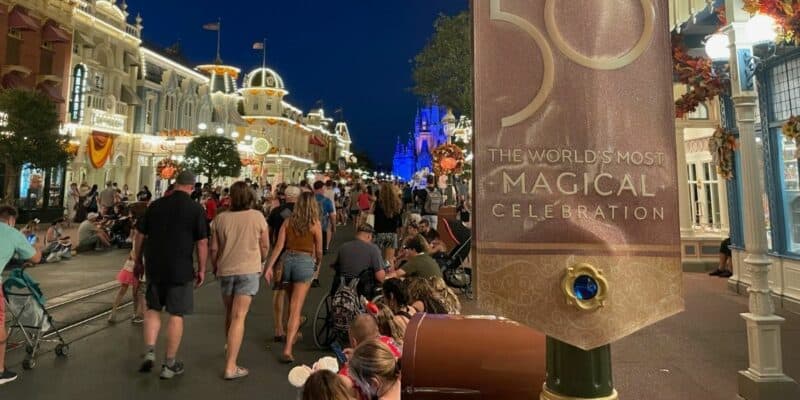 The Most Magical Celebration on Earth is now just days away, and the Walt Disney World Resort is ready to celebrate.

For its 50th birthday, Disney World has decided to go big! We are now seeing transformations fill every Disney Park. EPCOT’s Spaceship Earth will soon debut its new Beacons of Light as well as Harmonious, Disney’s Hollywood Studios is going to add lots of shimmer to Tower of Terror, and Disney’s Animal Kingdom will project on Tree of Life, as well as debut Disney KiteTails, an all-new show!

The one Park that has done the most for the celebration is Magic Kingdom. Of course, this seems incredibly fitting as it is the one Park actually to be turning 50 and where all the magic began. We have seen Cinderella Castle transform into a regal beauty; golden accents have been added throughout Main Street, U.S.A. and Fantasyland, and Disney Enchantment, an all-new firework show, will soon debut on October 1.

On Cinderella Castle, one of the most stunning aspects are the royal blue jewels that are scattered throughout. Recently, Disney has updated the 50th anniversary banners inside Magic Kingdom to have the same blue jewel. As you can see, Main Street, U.S.A. is lined with banners for the celebration, and now, the jewel helps create a cohesive theme as it leads Guests to the main event, Cinderella Castle.

At a closer glance, we can see the jewel is made of plastic and is bolted into the light post, securing both the jewel and the banner in place.

All of the Disney Parks now have individual banners for the 50th, but only Magic Kingdom can offer Guests an added touch of sparkle and decor when they enter.

Of course, this is only a tiny detail among the many that Disney has implemented for the 50th anniversary; however, it is one that will instantly catch the eye of Guests, and helps cater to the theming that you are entering a true kingdom.

What do you think of all the new decor at Walt Disney World? Let us know in the comments below!