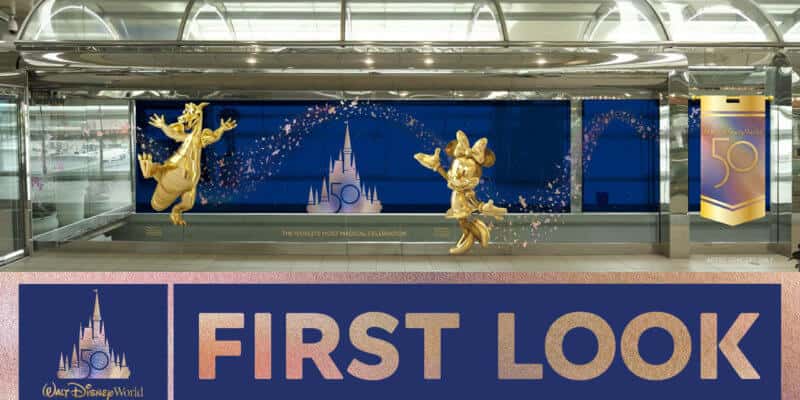 When visiting Walt Disney World, the magic often begins the moment Guests land at Orlando International Airport. Although Disney’s Magical Express is soon ending, Disney fans will still be able to see the airport’s new Magic of Disney store and all of the Disney promotions plastered on the walls.

Now, with the 50th anniversary celebration around the corner, it seems MCO will also be surprising Guests with new golden Disney magic! Not only will Guests get to see new interactive statues fill the theme parks, but Disney is working hard to ensure that the immersion for the 50th begins from the moment Guests land in Orlando.

With so much excitement ahead, we want you to feel immersed in the magic as soon as you arrive in Central Florida, which is why a talented group of cast members is hard at work transforming the arrival experience at Orlando International Airport (MCO) with the Greater Orlando Aviation Authority (GOAA).

Coming just in time for the 50th anniversary celebration this fall, airport passengers will discover many exciting Disney touches, including a wide-spanning art installation in the terminal train stations featuring favorite Disney characters, new magic engaging passengers as they walk through a glistening glow of projected EARidescent light patterns, and an immersive photo opportunity with a re-creation of a Disney ride vehicle to capture special memories as they make their way through the airport.

As part of this special transformation at the airport, we’re excited to also be working with GOAA on a new Magic of Disney store location opening with the South Terminal Complex in 2022.

“Orlando International Airport and Walt Disney World share a commitment to the Central Florida community. We proudly recognize the outstanding accomplishment of our longtime partner as they celebrate this impressive 50th Anniversary milestone,” said Phil Brown, Chief Executive Officer of the Greater Orlando Aviation Authority. “Collaborating on a commemorative presence at Florida’s busiest airport means we get to be the first moment of celebration for guests flying into Orlando to be part of the spectacular fanfare.”

It seems that Disney Guests will almost experience an attraction-like experience that will put them in the mindset to enjoy the Most Magical Place on Earth before they even arrive, as well as a photo-op.

From the photo, it looks like the monorail that transports Guests between terminals will be decorated to enhance the arrival experience.

Once Guests arrive at Disney World on October 1, there will be many options to enjoy. Guests will be able to see Main Street, U.S.A., and Cinderella Castle transform, EPCOT’s Spaceship Earth will glimmer with hundreds of points of light shining, Tower of Terror will also shimmer, and the Tree of Life will have special projections. On top of that, new attractions, fireworks shows, and decor will be added to the parks!

What do you think of Orlando International Airport adding more Disney touches for Guests?