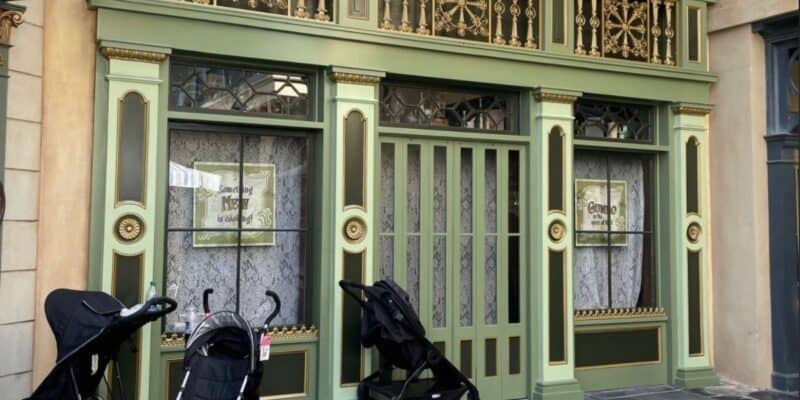 As the saying goes, “the only constant in life is change”, and that is true everywhere, especially at Disney Parks. Disneyland is always changing, growing, and adapting to bring the best experiences it can to Guests visiting its multiple resorts. One of those changes is happening in New Orleans Square at Disneyland and Disney is keeping Guests on their toes to figure out what is coming.

Inside the Magic visited Disneyland recently and saw that major progress was being made to the work being done in New Orleans Square. Until recently, scaffolding had been up around most of the area as changes are being made to not only the exterior but also to locations like the Le Bat en Rouge dress shop, which closed down in May.

Now, it appears that the work being done at this former merchandise location in New Orleans Square may be inching toward completion! The scaffolding is down, and the new paint color definitely seems to tie into the popular film. And with the painting complete, it seems like a good sign that this location is inching closer to opening, though we don’t yet know when that will be.

One other speculation among fans is that this location could become something similar to the Blue Sky Cellar located in Disney California Adventure. Blue Sky Cellar has been used to show Guests drawings and scale models of the work that is coming to the Park — most recently it showed how Paradise Pier was being transformed into Pixar Pier. Some Guests think that Disney will use the former Le Bat en Rouge location to show Guests more concept art and models of the retheming of Splash Mountain into The Princess and the Frog ride.

While Disney is keeping Guests in the dark, hopefully, the secret will soon be revealed. Until then, Disney fans and Guests will just have to keep the guessing game going!

What do you think the Le Bat en Rouge dress shop will become? Let us know in the comments!