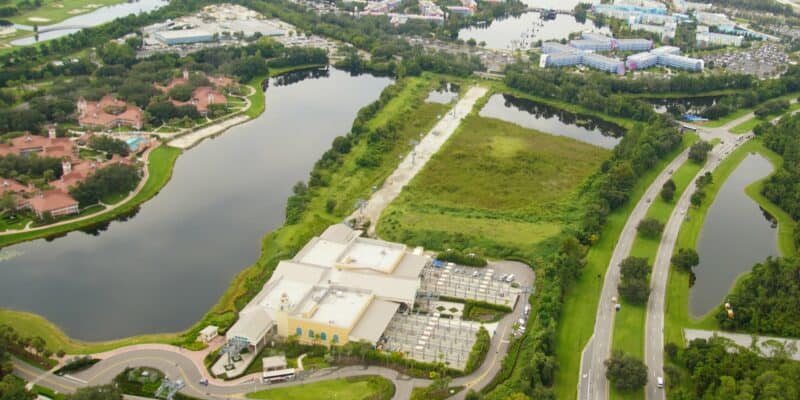 Walt Disney World Resort is the largest theme park in the world, with a whopping 27,000 acres. Within its boundaries, the four theme parks — Magic Kingdom, Disney’s Animal Kingdom, EPCOT, and Disney’s Hollywood Studios — cover approximately 950 acres. Though there are, of course, several Disney World Resort hotels, Disney Springs, and two water parks on property, Disney World still owns land that is not currently being used.

Now, thanks to a new aerial photo, we may have a glance at what Disney World‘s next construction project will be.

Aerial look at a plot of land set aside for future development at Walt Disney World. Next to the Caribbean Beach Skyliner station.

Aerial look at a plot of land set aside for future development at Walt Disney World. Next to the Caribbean Beach Skyliner station. pic.twitter.com/k1m696eLv0

Related: Which Construction Projects Are Still Moving Forward at WDW?

Unfortunately, at this time, we do not know exactly what Disney World will use this land for. Inside the Magic will always keep you updated with current and future projects at Walt Disney World.

In March 2020, Disney World bought even more land near Magic Kingdom. In fact, the company bought 26.3 acres of land from Lake Reedy Development Group LLC for around $39,932 per acre, totaling $1.05 million. You can read more about that here.

What do you think this plot of land will be used for? Let us know in the comments below.