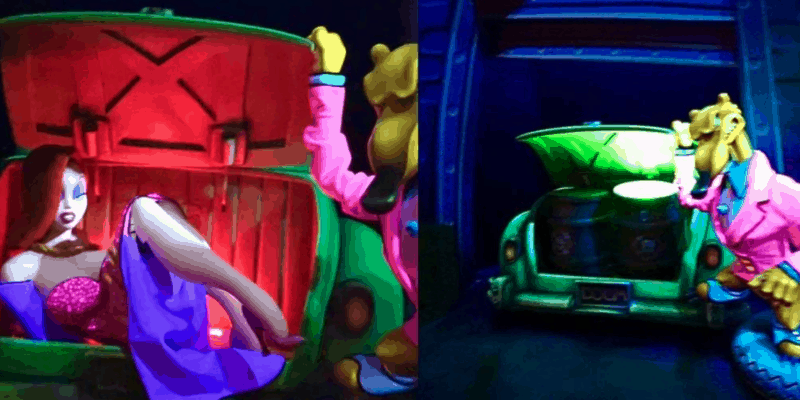 Disneyland has just made an update to Roger Rabbit’s Car Toon Spin in Disneyland as Guests notice one major element is missing.

While aboard the Disneyland ride, Guests will catch a taxi and follow Roger Rabbit and Benny the Cab as they race through Toontown looking for Jessica Rabbit. Of course, along the way, Guests will have to watch out for those pesky Weasels and the iconic toon-melting dip.

Well, in one scene, Jessica Rabbit used to be spotted in a car trunk with one Weasel attempting to close the trunk. However, on a recent ride, one Guest noticed Jessica Rabbit was missing! Per FIVE FIRES YOUTUBE (@thecalibae):

Since this article was initially published, Disney has confirmed that Jessica Rabbit was removed from the scene because of some changes coming soon to the attraction. The ride will be getting a plot twist and Jessica Rabbit will soon be have a lead role. Read all the details here.

Have you ridden Roger Rabbit’s Car Toon Spin? Did you notice Jessica Rabbit was missing? Let us know in the comments below.

This article was updated since it was originally published.

If you want to travel to Disneyland to take a spin on Roger Rabbit’s Car Toon Spin, start planning your trip today! Click here to get started.