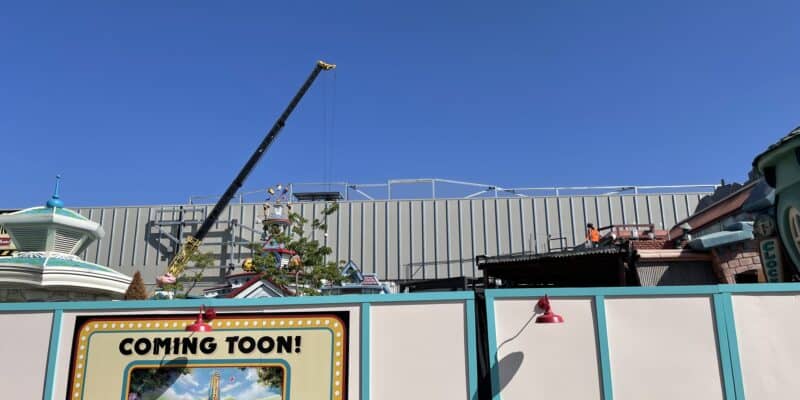 Mickey’s ToonTown is undergoing quite the transformation at Disneyland. Mickey & Minnie’s Runaway Railway, the first-ever ride featuring Mickey Mouse, Minnie Mouse, and all their friends, is coming to The Happiest Place on Earth, and Disney is moving forward on construction on this new ToonTown attraction.

But even during construction, ToonTown is still accessible to Guests!

At this time, construction is ongoing in Mickey’s ToonTown. However, the land is still accessible to Guests. Attractions within the land are open — including Gadget’s Go Coaster, Roger Rabbit’s Car-Toon Spin, and Chip ‘n Dale’s Treehouse — and Guests can even see characters like Mickey Mouse, Minnie Mouse, and Marie from The Aristocats in ToonTown throughout the day. You can walk through the land, say hello to your favorite characters, take in the classic scenery, and experience a few attractions.

Still, a portion of the land has been demolished and is not accessible. We previously wrote on how the demolition of the souvenir shop, The Gag Factory – ToonTown Five & Dime, was visible during theme park hours while Guests were meadering through the land. And on a recent visit to Disneyland, we can confirm that work is continuing in this area. Construction work can be seen and heard throughout the day.

The ToonTown construction is mainly in the Downtown ToonTown area, though the Disneyland attraction Roger Rabbit’s Car-Toon Spin, as mentioned, is still available to ride at this Disney Park.

There is also a huge building signalling construction with a playful sign:

The crane being used for the construction is also visible from outside the land:

Mickey & Minnie’s Runaway Railway is expected to make its Disneyland debut in 2023, though an exact opening date has not yet been announced for this new ride. We’ll continue to update Inside the Magic as more information is released!

Mickey & Minnie’s Runaway Railway is set to open at Disneyland in a couple of years, though it has been open at Disney’s Hollywood Studios at Walt Disney World Resort since 2020. For more information on this new ride, read the description below!

Click here to book a trip to The Happiest Place on Earth with the Authorized Disney Vacation Planners at Academy Travel!

Comments Off on Construction Progresses on Mickey & Minnie’s Runaway Railway, But ToonTown Is Still Open!