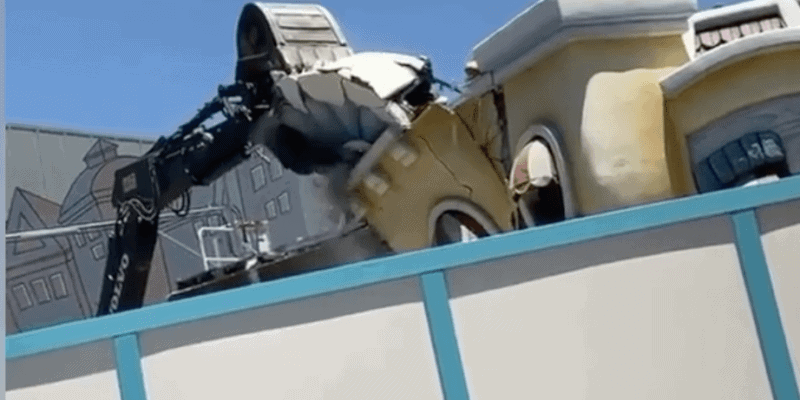 Disney does a lot of things to keep the magic alive for Guests, from changing decorations to planting new flowers and redecorating and painting areas of the theme park to give them a fresh look. Most of that is done overnight, so Guests are greeted by the new look when they walk through the gates in the morning.

Even though Disney does its best to make these changes appear seamless and as if they happened by magic, sometimes that is just not possible, especially when Disney needs to perform maintenance, refurbishments, or construction during Park hours and in an area of the Park that is visible to Guests. Such is the case when it comes to the building of Disneyland’s new attraction, Mickey and Minnie’s Runaway Railway — which will be located in Mickey’s ToonTown.

Construction on the Runaway Railway is moving full steam ahead after being delayed due to the pandemic, and Guests visiting Disneyland Resort were given an up-close and personal view of just how far along Disney was coming. Instagram user and travel blogger The Cali Bae/Five Fires (@thecalibae) shared multiple videos of demolition happening on The Gag Factory – ToonTown Five & Dime while Guests were in the theme park!

Well that building is done! Mickey & Minnies Runaway Railway construction is happening even during park hours! ????? video from @thatextramami

As you can see, The Gag Factory – Toontown Five & Dime  is being completely torn down to make way for the new attraction. What is interesting is that it was the main merchandise location inside ToonTown. Disney has not announced if another store will be built to replace it, where it would be, or what it would be called, but we do know that this is one of the areas of the land that will be taken over by the all-new Mickey & Minnie attraction.

Aside from its facade (which will be themed to the El CapiTOON Theater), Mickey and Minnie’s Runaway Railway at ToonTown will be identical to the ride that opened on March 4, 2020, at Disney’s Hollywood Studios at the Walt Disney World Resort — replacing what was once The Great Movie Ride.

The new attraction has the following description on the Disney World website:

Mickey and Minnie’s Runaway Railway was originally scheduled to open in 2022 but is now on track to open in 2023, per the latest update from Disney officials.

Are you excited to see so much construction happening on Mickey and Minnie’s Runaway Railway? Let us know in the comments!

CLICK HERE to get started booking your magical vacation with our friends at Academy Travel today!