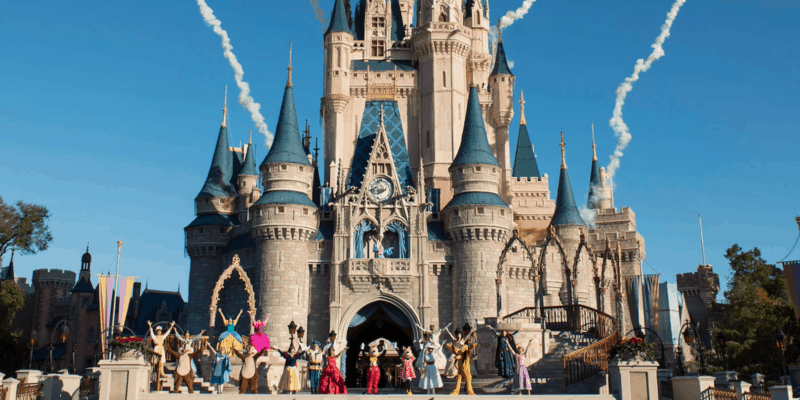 Disney World fans get excited — The iconic welcome show at Magic Kingdom looks to be returning just in time for the 50th anniversary, which kicks off on October 1, 2021!

Walt Disney World has not held the welcome show at Cinderella Castle, also known as the “Let the Magic Begin” show, at Magic Kingdom due to the ongoing pandemic. Now, however, as Disney World continues to modify its safety and health protocols as well as bring more entertainment back to the Parks and Resorts, it looks like Guests visiting Magic Kingdom will once again be “welcomed” inside by Mickey and friends as showtimes have been added to the Walt Disney World website!

This iconic show is the perfect way to start your day at Magic Kingdom, and we cannot wait to once again see Mickey and friends welcome us into Magic Kingdom!

If you are not aware, the welcome show used to take place at the Main Street Train Station, but a few years ago, Disney moved the show to Cinderella Castle and gave it its new name, “Let the Magic Begin”.

Start the Day in a Memorable Way

Just before Magic Kingdom park officially opens, make your way down Main Street, U.S.A. to the front of Cinderella Castle. Soon, the sound of trumpet fanfare bursts through the morning air, signaling the arrival of the Royal Herald.

There, you’re greeted by Mickey Mouse himself—along with a special Disney surprise you’ll have to experience to believe!

Let the Magic Begin is available to any Guest with a ticket to Magic Kingdom park on that date.
Guests who wish to experience the show may enter the park one hour prior to park opening.

Multiple shops on Main Street, U.S.A. may be open at this time, including Main Street Bakery.

At this time, there is no word on if other daytime shows will be returning to Magic Kingdom, such as the popular entertainment show, Mickey’s Royal Friendship Faire — which used to take place daily in front of Cinderella Castle at Magic Kingdom prior to the current pandemic.

Inside the Magic will continue to update you as we get information regarding entertainment at Walt Disney World.

Are you excited to see Magic Kingdom’s welcome show, “Let the Magic Begin” return to the Park in time for the 50th anniversary? Let us know in the comments below.