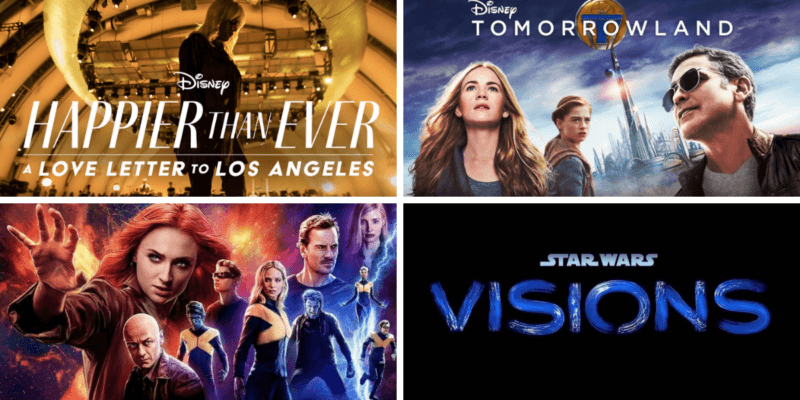 It may be hard to believe, but summer will soon be coming to an end — leaves will start to change colors, the weather will cool down, and annual pumpkin spiced lattes will make their much-anticipated return. As if that is not enough, Halloween is right around the corner and no one knows how to celebrate the changing seasons like Disney.

So let’s put on our sweatshirts, cuddle up with our PSLs, and take a look at the amazing content coming to Disney+ in September!

Dug has just met you and he loves you! One of the most loveable characters from the beloved Disney/Pixar movie Up is finally getting his own series.

Pixar Animation Studios’ “Dug Days” is a series of shorts that follows the humorous misadventures of Dug, the lovable dog from Disney and Pixar’s “Up.” Each short features everyday events that occur in Dug’s backyard, all through the exciting (and slightly distorted) eyes of our favorite talking dog. Written and directed by Academy Award® nominee and Emmy® Award winner Bob Peterson.

“Monsters At Work” takes place the day after the Monsters, Incorporated power plant started harvesting the laughter of children to fuel the city of Monstropolis, thanks to Mike and Sulley’s discovery that laughter generates ten times more energy than screams. It follows the story of Tylor Tuskmon, an eager young monster who graduated top of his class at Monsters University and always dreamed of becoming a Scarer, until he lands a job at Monsters, Incorporated and discovers that scaring is out and laughter is in.

“What If…?” flips the script on the MCU, reimagining famous events from the films in unexpected ways. Marvel Studios’ first animated series focuses on different heroes from the MCU, featuring a voice cast that includes a host of stars who reprise their roles.

Marvel Studios Legends serves as an exciting refresher for the various heroes and villains making their way to the highly anticipated streaming shows premiering on Disney+, setting the stage for the upcoming adventures. The episode will feature The Ten Rings.

Uptight young Deputy Marshal Scott Turner’s life is turned upside down when he inherits Hooch, a slobbery mess of a dog. His new pet is aggravating, but he turns out to be quite good at helping Scott catch criminals, find love, and maybe even solve the mystery of Scott’s dad’s last case.

This new series will follow famous dog whisperer Cesar Millan as he works with families to help them tame their uncontrollable dogs.

Cesar helps a fearful family, which is still holding on to the pain of losing their first dog in a tragic accident, deal with their two-year-old Black Lab’s similarly aggressive personality. And later, a young 10-year-old girl looks to Cesar for help when her emotional support puppy is causing more chaos than comfort.

Cesar sets out to help a young couple’s sensitive Australian cattle dog, whose severe separation anxiety has held hostage the lives of his pet parents for nearly a year. And later, Cesar attempts to calm a blinding Lhasa Apso, who lacks basic hygiene and has almost become too hostile for his exhausted owners to provide his needed eye care.

Behind the Scenes of ‘Growing Up Animal’ – Premiere

Go behind the scenes of “Growing Up Animal,” the six-episode, intimate and extraordinary adventure of baby animals, from the safety of the womb to the uncertainty of birth and their tentative first steps. Each episode sees the incredible transformation of a different iconic animal, full of wonder and emotion. “Growing Up Animal” is the magical story of a mother’s instinct to nurture and her infant’s drive to survive.

Happier Than Ever: A Love Letter to Los Angeles

GRAMMY® Award-winning and chart-topping artist Billie Eilish will make her Disney+ debut with “Happier than Ever: A Love Letter to Los Angeles,” a cinematic concert experience. Fresh off the heels of her brandnew album, “Happier than Ever,” the Disney+ original will feature an intimate performance of every song in the album’s sequential order – for the first and only time – from the stage of the legendary Hollywood Bowl.

Directed by Robert Rodriguez and co-directed by Oscar-winner Patrick Osborne the special will also include animated elements, taking viewers on a dreamlike journey through Billie’s hometown of Los Angeles and its most iconic backdrops. “Happier than Ever: A Love Letter to Los Angeles” will feature guest appearances from singer-songwriter FINNEAS, the Los Angeles Children’s Chorus, the Los Angeles Philharmonic conducted by Music & Artistic Director Gustavo Dudamel, and world renowned Brazilian guitarist, Romero Lubambo. “Happier than Ever: A Love Letter to Los Angeles” was produced by Interscope Films and Darkroom Productions, in associate with Nexus Studios and ALPWW, with Kerry Asmussen as the Live Concert Director and Pablo Berron as Director of Photography.

From Disney comes two-time Oscar® winner Brad Bird’s riveting, mystery adventure “Tomorrowland,” starring Academy Award® winner George Clooney. Bound by a shared destiny, former boy-genius Frank (Clooney), jaded by disillusionment, and Casey (Britt Robertson), a bright, optimistic teen bursting with scientific curiosity, embark on a danger-filled mission to unearth the secrets of an enigmatic place somewhere in time and space known only as “Tomorrowland.” What they must do there changes the world—and them—forever. Featuring a screenplay by “Lost” writer & co-creator Damon Lindelof and Brad Bird, from a story by Damon Lindelof & Brad Bird & Jeff Jensen, “Tomorrowland” promises to take audiences on a thrill ride of nonstop adventures through new dimensions that have only been dreamed of.

This is the story of one of the X-Men’s most beloved characters, Jean Grey, as she evolves into the iconic DARK PHOENIX. During a life-threatening rescue mission in space, Jean is hit by a cosmic force that transforms her into one of the most powerful mutants of all. Wrestling with this increasingly unstable power as well as her own personal demons, Jean spirals out of control, tearing the X-Men family apart and threatening to destroy the very fabric of our planet. The film is the most intense and emotional X-Men movie ever made. It is the culmination of 20 years of X-Men movies, as the family of mutants that we’ve come to know and love must face their most devastating enemy yet — one of their own.

Written by Kourtney Kang and set in modern-day Hawaii, Doogie Kameāloha, M.D. follows the adventures of the titular character, a mixed-race 16-year-old girl, juggling a budding medical career and life as a teenager. Guiding Lahela (and also complicating things) is her family, including her spit-fire Irish mother who’s also her supervisor at the hospital, and her Hawaiian “Local Boy” father struggling to accept that his daughter is no longer his little girl.

Marvel’s What If – Episode 5

Adulting can be hard. Some days you’re nailing it, while other days, you’re just a stack of kids hiding in a trench coat hoping no one notices. Gia finds herself in this exact scenario the night of her 21st birthday. This is a story about the insecurities of adulting and how we’re all just faking it till we make it.

Pirates of the Caribbean: On Stranger Tides

Fans can finally watch the entire Pirates of the Caribbean franchise on Disney+. Currently, the fourth film in the series is missing, but beginning September 10, all five films will be available on Disney+.

Nona, a grandmother who plans to spend her day off by shutting out the world to watch her favorite TV show, “E.W.W. Smashdown Wrestling.” However, when her 5-year-old granddaughter Renee is unexpectedly dropped off, Nona is caught between her two favorite things. Renee wants to play while the normally-doting Nona wrestles with wanting to watch the Smashdown, leading to a decisive showdown between the two, and a loving compromise.

Star Wars: Visions will be a series of animated short films celebrating Star Wars through the lens of the world’s best anime creators. The anthology collection brings together some fantastic visions from several of the leading Japanese anime studios, offering a fresh and diverse cultural perspective to Star Wars.

Marvel’s What If – Episode 7

Marvel’s What If – Episode 8

Please make sure to check back with Inside the Magic’s list of Disney+ releases, as Disney could release more titles to its September lineup in the future.

What are you most excited to watch on Disney+ in September? Let us know in the comments!