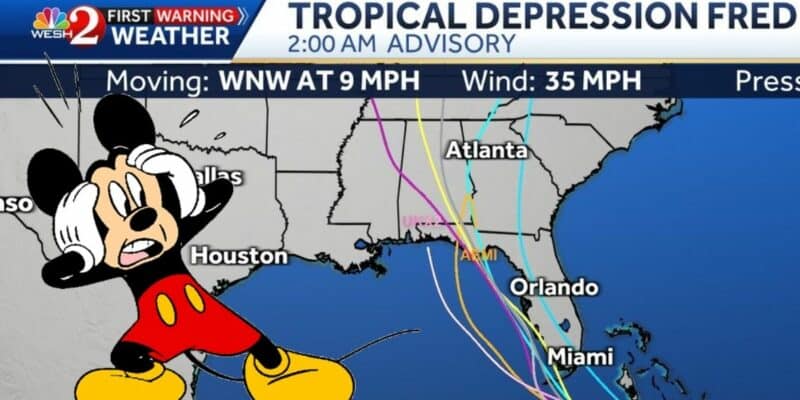 Here is everything you need to know about Tropical Storm Fred.

Early this morning, Chief Meteorologist WESH-TV2/CW18-TV Tony Mainolfi, took to Twitter to share the latest models of Tropical Storm Fred, showing the path has shifted a bit and will now, more than likely, stay on the west coast of Florida:

New models for Fred are coming in, and I wanted to get them right out to you…

New models for Fred are coming in, and I wanted to get them right out to you… pic.twitter.com/3Odn9fHbzR

As of 5 a.m. on August 13, Tropical Storm Fred was 125 miles south-southwest of Great Exuma Island and 370 miles east-southeast of Key West. Maximum sustained winds are around 35 mph, with higher gusts.

Tropical Storm Watches have been issued for the Florida Keys and parts of South Florida.

Even though the storm shifted a bit, if you are traveling to the Orlando area this weekend, you still need to be prepared. The National Hurricane Center reported between Friday and Monday there could be heavy rainfall across southern and central Florida.

At this time, Walt Disney World nor the other Orlando theme parks have made any changes in operations due to Tropical Storm Fred, but Inside the Magic will continue to follow the storm’s path and keep you updated as we get information.

If you are planning a trip to Walt Disney World or any other Orlando theme park in the near future, make sure to keep an eye on the latest models as we approach the weekend and plan accordingly.