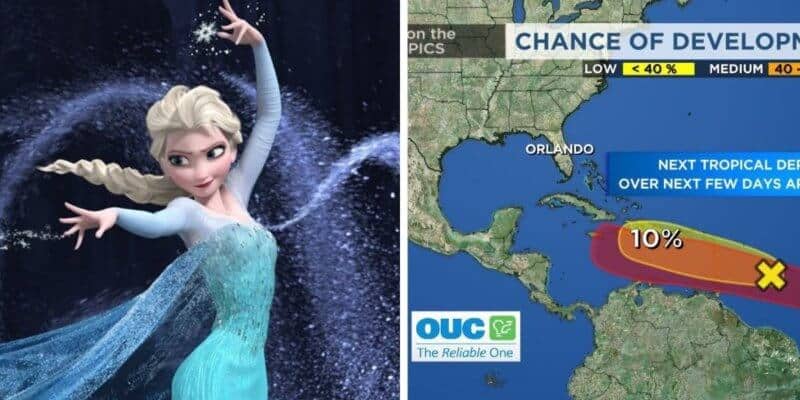 In Florida, one thing that is unfortunate about the state is that it is prone to hurricanes. When Guests visit Disney World in the summer, especially from July to September, it will likely rain every day, which is not a huge deal as the storms in Florida leave as quickly as they appear. However, if you are in Disney World during a hurricane, the weather may not be what you expected for a theme park day.

As we head into hurricane season in Florida, so far, we have not had to experience any terrible storms. That being said, there is a possible hurricane on the way, and her name may sound familiar to many Disney fans: Elsa.

Florida’s WFTV meteorologist Brian Shields took to Facebook to share a chance of a hurricane developing, and her name is Elsa. Much like Elsa in Frozen, this Elsa could have the power to cause damage if she gets close enough to land.

“ELSA” FORMING:
The yellow X is falling apart, but the red X is a strong tropical wave that could become a hurricane.
“Elsa” is the next name on the list.
The Lesser Antilles will most likely deal with tropical storm conditions on Friday.
DOWN THE ROAD: This area is still way out there so it is too early to know if or how it could impact the United States.
Remember, everyone is watching this area, but it won’t hit everyone. Most storms don’t hit you. But this is a spot to watch because it is strengthening and the long term prospects aren’t known.

As Brian noted, it is not certain how strong Elsa will become and where she will hit exactly in terms of affecting the United States. That being said, we can see that the storm is forming directly beneath Orlando, so there is always a possibility that if Elsa strengthens, Disney World Guests may eventually experience her effect. Personally, I hope this Elsa does not “Let it Go.”

For now, Guests visiting Disney should not worry as Elsa is in the very early stages of development. Plus, Disney World Resorts are built to withstand hurricanes, so even if you are ever in Disney World when a hurricane hits, you will be safe at your Disney Resort!

Have you ever experienced a hurricane when at Disney World? Let us know your story below!