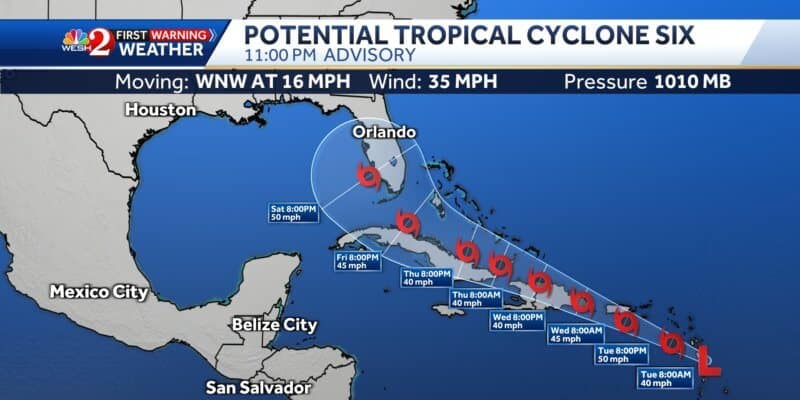 If you are traveling to Florida in the near future, you may want to keep an eye on the latest Tropical Storm as it is likely to form as it continued its path towards the Sunshine State.

According to WESH2, forecasters with the National Hurricane Center say that Tropical Storm Fred is likely to form as it continues its path toward Florida.

This morning, as of approximately 7:11 a.m., the model showed that the storm is 65 miles southwest of Guadeloupe and 330 miles east-southeast of Ponce, Puerto Rico. Forecasters also said the storm is moving west-northwest near 17 mph and that is expected to continue over the next few days.

The current model shows the storm is expected to pass near or over the U.S. Virgin Islands and Puerto Rico late Tuesday and Tuesday night, and near or over Hispaniola on Wednesday.

WESH2 reported that forecasters expect the storm to gradually strengthen over the next 48 hours.

Here’s the latest info with the 11 pm advisory on #PTC6. Could be a big rain maker here by the weekend. Stay with @WESH for updates on the #Tropics. #weshwx

Here's the latest info with the 11 pm advisory on #PTC6. Could be a big rain maker here by the weekend. Stay with @WESH for updates on the #Tropics. #weshwx pic.twitter.com/r0Qoc8afCH

At this time, we do not know how the potential Tropical Storm will affect Florida or the Orlando area, but Inside the Magic will continue to follow the storm’s path and keep you updated as we get information.

If you are planning a trip to Walt Disney World or any other Orlando theme park in the near future, make sure to plan accordingly.